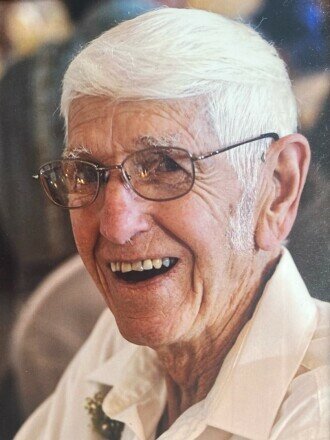 Walter Lee Carter, 90, died at Solvay Hospice House in Duluth, Minnesota, on July 8, 2022, with loving family by his side. Walt was born on August 18, 1931, the sixth of Fred and Susan (Hoefling) Carter’s eight children. Walt grew up during the Depression–“but never poor”–on the homestead still called “Carter’s Corner” in Oulu, Wisconsin. Walt graduated from South Shore High School in Port Wing, Wisconsin in 1950 and later enlisted in the United States Air Force. He was stationed in Reno, Nevada, Oscoda, Michigan and Labrador, Nova Scotia.

Walt married Arlene Mae Wigren on January 22, 1954. Walt and Arlene owned and operated several businesses throughout the years including the Texaco Service Station in Lakeside, Duluth Downtown Sanitary Service, North Shore Sanitary, Carter’s Crockery and Ceramics, and Carter Construction. Walt also drove school bus for many years. Walt was a car enthusiast from a very young age. He and his son Ron competed in many stock car races, primarily at the Proctor Speedway. Walt was a member of and participated in several car clubs including the Arrowhead Chapter of the A.A.C.A car club. He loved going to auctions and “going for a ride” in his antique and classic cars. Walt and Arlene traveled to all four corners of the United States, and many parts of Canada and Mexico, with family and friends and wintered in Mesa, Arizona, for many years.