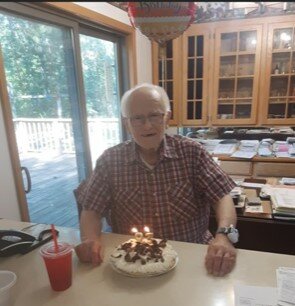 Donald Lewis Olson, born August 9, 1929, age 93, passed away peacefully on December 31, 2022, at his home in North Branch, Minnesota. Born and raised in St. Paul, the son of Walter and Beda (Hultkrans) Olson. Don attended Ramsey Grade school, Maria Sanford Jr. High and Central High School, all in St. Paul. After graduating from High School in 1947, he attended Macalester College 1947-1948. He then attended the University of Minnesota graduating in 1954 with a Bachelor Degree in Mechanical Engineering. He was a member of the Minnesota Air National Guard from 1950 – 1953 and the United States Air force, 133rd Maintenance Squadron, from 1951 – 1952 serving as a Mechanic and Machinist. He received an honorable discharge from both. After serving his country, Don took a position at Minneapolis Moline as a test engineer for a year and then went to work for Toro as a design engineer until 1964. He then worked for Tennant as a project engineer, senior engineer and engineer in research until his retirement in 1993. Don had a passion for engineering. He had many ideas and was always working on projects and inventions. He took pride in his work and his contributions. Don was a long member of the American Society of Mechanical Engineers 1954 to present; American Society of Tool Engineers 1954 – 1959; Theosophical Society in America; Spiritual Frontiers Fellowship International; International Institute of Integral Human Sciences; and American Swedish Institute. He was also a Registered Professional Engineer, mechanical, Minnesota 1960 – 2002; Preceded in death by his parents, Walter and Beda Olson. He is survived by his sister, Jean (Olson) Rae; niece Sally Rae; nephews Scott Rae (Sally) and Mark Rae (Melissa); five grand nephews; his close friends Betsy Mae Williams (Sperbeck); Dave Wilson; Bob and Julie Olson; and Jennifer Franson. A private memorial will be held at a later date. Arrangements are under the direction of the Cremation Society of Minnesota.