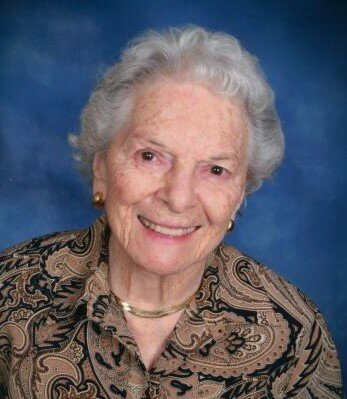 At age 100 Phyllis of Roseville MN passed away on December 29, 2022. She was born in Minneapolis on February 1, 1922 and was preceded in death by parents Everett and Ruth Moyer. Phyllis grew up in Los Angeles, where she became a skilled ice skater with her best friend Kathleen and attended Pomona College. She also met a dashing Englishman named Keith, a career Army officer, who she married 1941.

After earning a degree in Bacteriology from UCLA, Phyllis joined her husband in Germany after WWII where Keith was posted. They enjoyed travelling throughout Europe and had babies, Penelope and Michael. Phyllis and Keith relocated to other Army stations in New York, Virginia, Okinawa, and California. Phyllis earned a second degree as a school counselor and worked in Iowa and Carnation, Washington.

Phyllis and Keith retired to the foothills of the Cascades in Washington state where she became a competitive bridge player, a classical music enthusiast, talented knitter, jam maker, and skilled winemaker. She excelled at fishing for trout and salmon in the Pacific Northwest. Phyllis and Keith were adventurous and travelled the world during their retirement. In 2012, Phyllis moved back to Minnesota to be closer to family and settled into the community at Eagle Crest Presbyterian Homes in Roseville, Minnesota. She also earned her Life Master award from the American Contract Bridge League.

Phyllis had a kind and generous heart, supporting many family members and grandchildren. She was truly appreciated and enjoyed by everyone who knew her. She is preceded in death by her husband, sister, brother and children Michael and Penelope. She is survived by her son, Kent Van Cleave Houlson, his wife Nalini, nieces Zena Seldon, Beth Aronoff, Maggie Aronoff along with many other family members, grandchildren and great grandchildren.

A private celebration will be held at a future date in 2023.

Share Your Memory of
Phyllis
Upload Your Memory View All Memories
Be the first to upload a memory!
Share A Memory
Plant a Tree