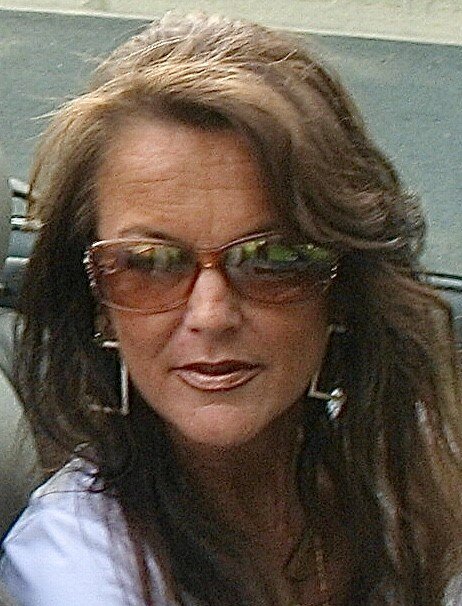 Holly Ann Evans, a life-long creative, witty, determined, beautiful and spirited painter, daughter, sister, and friend, died on December 16, 2022, in Minneapolis, Minnesota, from complications of cancer treatment. She was 62.

Holly was born in Carroll, Iowa, on December 19, 1959, the fourth of Bill and Lois (Prescott) Evans’ five daughters. Her eyes were green with one half brown, ensuring from the beginning that she saw the world in unique ways.

Holly attended grade school and high school at Carroll Community Schools, excelling in art and music. She was a gifted flute and saxophone player, and a fabulous dancer. Holly’s beauty and spark made her ultra-photogenic. Even her driver’s license photos were gorgeous. She was hilarious, and her impersonations of people were worthy of Saturday Night Live. She loved to make her family laugh.

Holly thrived on the physical act of painting, the smell of paint, textures, and the imaginative process. She was a master of color and light, and some of her favorite subjects were athletes, musicians, pools, cars and boats, and Riviera landscapes. She could paint quickly and in large-scale, which allowed her art to grace commissioned murals for clinics and restaurants throughout the Twin Cities. Her work caught the eye of Prince’s creative director, and Holly contributed to the interior of Prince’s Minneapolis nightclub, Glam Slam, along with other projects. If you attended opening night at Glam Slam, you saw Holly painting live portraits of VIPs.

Holly was the ultimate fan -- of music and musicians, actors, and athletes. She loved to follow tennis and Minnesota Vikings football. Her paintings of Vikings players in action were prized by the players. In the movie Grumpy Old Men, the actress Ann-Margret played an artist, and Holly provided the paintings featured in the movie. Holly especially loved that in one scene, her painting was tossed in the snow. In addition to gallery work, she created stunning commissioned portraits. She pursued her art until her illness was diagnosed in 2017.

Holly was proud of her work. She took her mini portfolio everywhere, and with her charming personality, a dinner out often meant the entire restaurant was looking at her work by the end of the night.

Her favorite place was her cozy loft, where she was surrounded by her paints and brushes, twinkling lights, books, music, her paintings, and always a ballet barre. She used the same old door as her paint palette for years, which became a piece of art itself.

Holly was one tough cookie, and an absolute warrior during her illness. She’ll be missed by all who loved her optimistic, playful, stylish, and fiercely independent spirit. We are grateful to have her paintings as her legacy.

Final arrangements are entrusted to the Cremation Society of Minnesota, and a celebration of Holly’s life is pending for 2023, in Minneapolis.

Share Your Memory of
Holly
Upload Your Memory View All Memories
Be the first to upload a memory!
Share A Memory
Plant a Tree