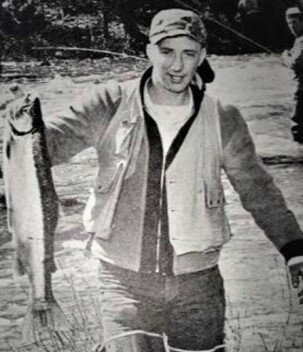 Timothy Paul Carroll Senior of Duluth, MN passed away peacefully on 11/16/2022 after a long battle with COPD. He was surrounded by his loving family.

He was born in Duluth to Frank and Frances Carroll (Lindgren) on June 22, 1942. He was a lifelong resident of West Duluth and proud of it. Tim had a 35 year career working as a yardmaster at the Duluth, Winnipeg, and Pacific Railway where he was a proud Union rep fighting for what he believed in.

From just a young boy, he had an unparalleled passion for fishing the small creeks and streams near his childhood home. His first fish were the Brookies. For over 65 years he recorded every fish he ever caught, what fly he used, the type and size of the fish. He called it his “research.” As he became old enough to hitchhike or drive, the North Shore and Northern WI streams became his focus and is where he spent countless hours slaying the steelhead, rainbows, and browns. He became a legend on the North Shore and was nicknamed North Shore Timmy. He taught all of his kids and grandkids how to read a stream, set the hook, tie flies, and enjoy the rivers. He lived to fish and fished to live. Fish on!!

His other past hobbies included bowling, coaching his daughter’s state championship girl’s and women’s softball teams and most recently enjoying the bird and deer wildlife outside of the window.

His family was very important to him. He loved his kids, grandkids and great-grandkids dearly.

We will be forever grateful for his hospice nurse, Michelle. She provided wonderful care and companionship to our dad and to us. We also had the privilege of caring for our dad these past 4.5 years. Josie and Bob Bergeson were absolute angels inviting him to live with them. It gave him joy.

We will be having a Celebration of Life for him in the spring of 2023 during the annual Steelhead run on the North Shore. We will post more info at that time. Our family humbly requests that in lieu of flowers or memorials, donations be made to the LSSA (Lake Superior Steelhead Assoc) in Tim’s honor. Donations may be sent to: 10 Olea Ave - Duluth, MN 55810