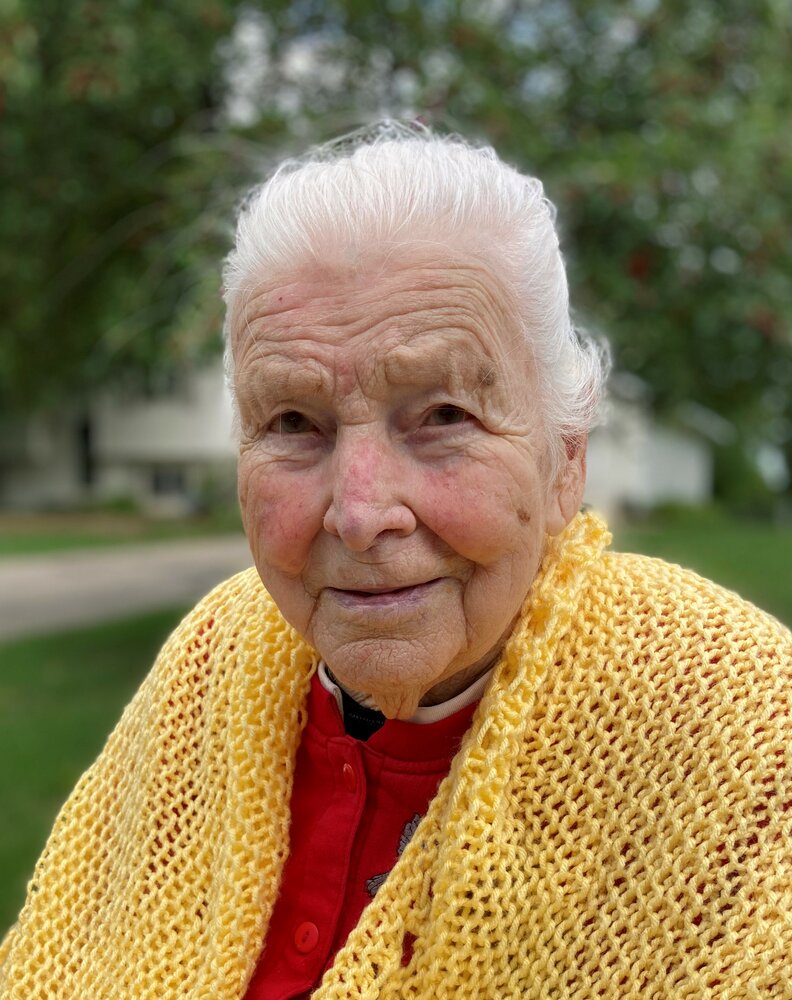 Violet Ann (Beeman) Skolte Violet Skolte passed away peacefully at the Staples Care Center on October 16th at the age of 94.

She was a beloved mother, grandmother and friend.  Violet was born to Fred and Lorena Beeman on December 13, 1927 in Mercer, Wisconsin, the youngest of nine children. The family later moved to Austin, MN. She graduated from Austin High School in 1947. Her family traveled a great deal during the war because her father was a carpenter on military bases. She graduated a year after her elementary friends. She married Kenneth Skolte in April 1948. Together they farmed near Rose Creek MN, and later moved to Bertha, MN where they raised their family of twelve children. Violet was also employed off the farm at Todd County Public Health as an aide in Long Prairie, at Carter Ringer Coat Factory and later at Benson Optical both in Staples MN until her retirement in 1986. She enjoyed gardening, flowers, traveling, knitting, sewing, dogs, riding bike, playing piano, and painting. She was an avid Bob Ross fan and painted many, many landscape treasures for her family and friends. Her pride and joy was her children and grandchildren. As a mother she will be remembered for making the best carmel rolls, and her ability to feed a crowd with limited pantry stock. In her later years, Violet moved to the Redwood Falls / Belview area, where she was a member of the Southwest Minnesota Arts and Humanities. She volunteered at the Redwood County Clothing Shelf and worked part time at Ben Franklin. She enjoyed arts and crafts and dubbed her creations “Stuff and Nonsense.” Violet loved her family and loved her country. Six of her children, three sons-in-law, 11 grandchildren and one great grandchild have served or are serving in the military. She was honored by the Southwest Minnesota State University Veteran’s Club in 2014 for her Meritorious Civilian Support of Veterans. She was active in her retirement, would ride her bike even in the winter months, and she traveled to Germany to visit family at the age of 89. Her spunky attitude, quick wit and great hugs will be missed.

She is survived by her children; Jim (Lynette) Skolte of Mora, MN, Elaine (Phill) Martinez of Vacaville, CA, Frank (Joleen) Skolte of Frazee, MN, Keith (Julie) Skolte of Mahtowa, MN, Kathy (Bill) Kokesh of Isanti, MN, Becky (Mark) Lein of Williams, MN, Dan Skolte of Belview, MN, Joe (Linda) Skolte of Lino Lakes, MN, Gail Cannon of Milaca, MN and Cindy (Jim) Zetah of Cushing, MN, 26 grandchildren, 43 great grandchildren and many nieces and nephews. Many, many thanks to the staff at the Manor and Lakewood Care Center for your compassionate care of our mother.

Visitation will be held on Friday, October 28 at Faith Lutheran Church in Staples from 5-8 p.m. Visitation will continue on Saturday October 29 at 10:00 a.m. with a Celebration of Life Service at 11, followed by lunch and interment at the Evergreen Hill Cemetery in Staples.