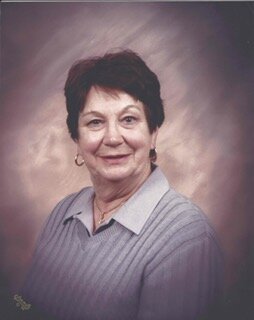 Jeanne Marie Chevalier (née Guettler), longtime resident of Bloomington, MN, peacefully passed into eternity Tuesday, September 27, 2022, at Rivers of Life in Savage, MN at age 91. Jeanne was born October 20, 1930, in Cologne, MN, the eldest child and only daughter of the late Philip and Marie Guettler.

Jeanne was a star pupil at St Bernard’s grade school in Cologne. As was common in those days, if you were from a small town and wanted to attend high school, you went to boarding school. So off to Our Lady of Good Counsel in Mankato, MN, Jeanne went. She then attended the College of St. Benedict before completing her Medical Technology degree at the University of Minnesota.

After college Jeanne married and started a family. Due to her husband’s career, the family moved and lived in South Dakota, Iowa and Wisconsin before returning to the Twin Cities. During these times Jeanne worked part time as a lab technologist at various hospitals, as well as sewed clothes for her children, gardened, and participated in bridge clubs.

After one last transfer to Geneva, Switzerland, Jeanne moved back to Bloomington, MN, where she happily stayed the rest of her life. Jeanne found employment at Snyder’s Drugstore and worked her way to being a buyer. Outside of work Jeanne pursued her many talents from dancing, golf and cross-country skiing to being an avid fisherwoman to indulging her local grandchildren. Once she retired from Snyder’s she continued to work at Dayton’s Department Store. No matter her work life, Jeanne always managed to find time to enjoy family and the friends she had made along her life’s journey.

Jeanne was a loving and caring mother, aunt, sister, grandmother and friend. She was an independent person and a sports fanatic – Minnesota professional teams as well as University of Minnesota sports teams. Jeanne always had a talent for cooking (particularly German food) and baking, which she inherited from her mother. Throughout her life she was a devout Catholic and volunteered at The Church of St. Edward in Bloomington, MN.

Jeanne is preceded in death by her parents, Philip G and Marie R (née Litfin), and brothers Donald P and Stan R.

The family wishes to express sincere gratitude to the entire staff at the Rivers of Life Memory Care/Assisted Living. Charitable donations can be made to The Church of St. Edward, Bloomington, MN in Jeanne’s name.

Share Your Memory of
Jeanne
Upload Your Memory View All Memories
Be the first to upload a memory!
Share A Memory