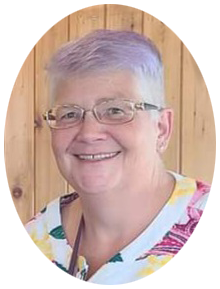 Irene was born on August 2, 1961 to parents, Richard Hornung Sr and Louise Hornung (Schneider). She graduated from St. Bernard’s High School in 1980. Upon graduation, she entered the nursing program at St. Mary’s nursing school. During her time at school, she worked both at Ramsey (Regions) Hospital and Bethesda Nursing Home as a nurse’s aide.

Irene met Brian in June 1988 through a personal ad. They were married on June 15, 1991. She left her employment to be at home with her new 7-year-old son. After a few years, she went back to work, first at Quorum Litigation where she worked as a document coder, then later as a call center operator at One Call Concepts. She enjoyed working with her coworkers at both, creating relationships that went well beyond employment. She retired after a health issue in October 2010.

In May 1996, Brian and Irene purchased her childhood home and made it their home that was filled with love and laughter. She loved playing with children and would often be found taking care of them and taking selfies with them. She loved taking long walks and would often be seen walking to the park with a stroller and a child.

Irene was very active in her church, Central Baptist. She served on the board for Central Women’s Fellowship. She also enjoyed serving the church in the Children’s area as well as being a greeter at the front door once a month.

Irene’s favorite color was purple, if something could be purchased in purple, then that was hers. So of course, the MN Vikings were her team. Coffee was another passion of hers. She loved to play games and joke around, she was always quick with a smile or laugh.

Irene is preceded in death by her parents, Richard “Dick” and Louise; her brother, Andrew Pluta.

A Celebration of Life Service will be held on October 1, 2022, at 1 PM at Central Baptist Church, 420 North Roy Street, St. Paul MN 55104. There will be fellowship and refreshments after the service.

In lieu of gifts, donations can be made in Irene’s memory to either Central Baptist Church Foundation or Children’s Shelter of CEBU.

Share Your Memory of
Irene
Upload Your Memory View All Memories
Be the first to upload a memory!
Share A Memory
Plant a Tree