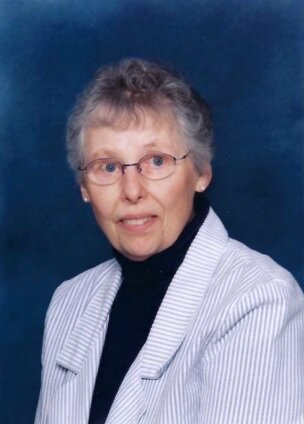 Ginny was born on June 29, 1932 in Cleveland, Ohio to Lorenz H. Ristow and Ethel E. Ristow. She grew up in Wilmette, Illinois and graduated from Northwestern University. She was married to Richard Y. Harris on May 1, 1954. Following short stays in Chicago and Indiana, she and her family moved to Minnesota. First to Bloomington and then settled in Victoria.

While busily raising her family in Bloomington, she taught grade school at St. Richard’s Elementary School. After moving to Victoria in 1963, she began a career in government service. First as a reporter, then editor for the Sun Newspaper system. She reported on city activities and city council matters for cities in western Hennepin and eastern Carver Counties. She was an ardent supporter and activist for the Carver County Republican Party.

Her reporting caught the attention of the Victoria City Council and Ginny was hired as Victoria’s first City Administrator. She was the first female city administrator in Carver County.

Following a successful career in Victoria, she was named Carver County’s Director of Planning and Zoning and held this position for nearly 20 years. She was active in many land use planning organizations and served on committees for both the Metropolitan Council and State of Minnesota on land use matters. Ginny was particularly proud of her efforts towards preserving agricultural land for farming. She was a forerunner with her belief that residential and commercial development would best occur only after the land was annexed to a city, and sewer and water were available to facilitate its development. She was passionate about Lake Minnetonka and its water quality, and proudly served as a director of the Lake Minnetonka Conservation District.

Following her retirement in 1995, she decided to pursue the experience of urban living. After considering proximity to grandchildren, public transportation options and cost, she decided on downtown St. Paul and moved to Kellogg Square Apartments.  She never tired of her view of the US Courthouse and Mississippi River. She lived there for 23 years, loving her downtown experience, particularly its libraries, and became an expert on the bus and light rail schedules.

Ginny was predeceased by her parents, Lorenz and Ethel Ristow, her former husband Richard Harris, her sister Elizabeth (Ristow) Schayer and her beloved daughter Kathy Tousignant (Joe). She is survived by her children, Larry (Tammy) Harris of Naples, FL, Michael (Nikki) Harris of Palo Alto, CA, Teresa (Kyle) Jackson of Minneapolis, Rich (Janet) Harris of Tega Cay, SC, Tom Harris of Minneapolis, Patricia (Mark Panek) Harris of Prior Lake, and KC Harris of Hopkins, along with 14 grandchildren and one great grandson.

She will be deeply missed by her family and friends. Her family greatly appreciates the care and companionship she received at Lexington Landing, the University of Minnesota Hospital and Carondelet Village. A private celebration of life has been held. Donations in Ginny’s memory may be sent to Second Harvest Heartland.