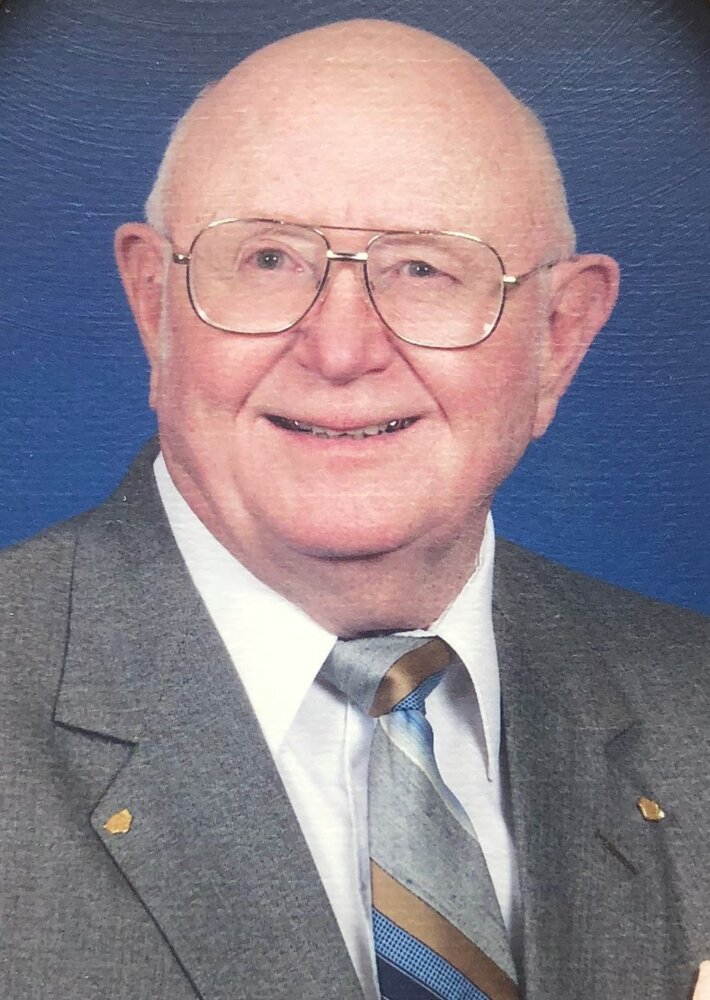 Donald and his twin brother Dean were born October 29, 1932, in St Paul, MN. The two grew up in Willernie, MN and attended Mahtomedi High School, where Donald was involved in athletics and theater before graduating in 1950. Donald spent the summer after high school driving a beer truck in Montana before enlisting in the US Navy. He served on the PCES 873 as a welder from September 1950 to October 1953. After an honorable discharge, he enrolled at Dunwoody College of Technology graduating with an Associate’s Degree in HVAC. Red worked for a variety of heating equipment suppliers after graduation and while working for Lindsey Brothers he met his bride, Karen Sue Thomas. They married on June 6, 1964 in Mason City Iowa and raised their two daughters in Richfield, MN. Don was a 32-year employee of BJ Mulchay where he excelled as a salesman making many friendships with his co-workers and customers. He was a member of Richfield United Methodist Church until he and Sue moved to Rosemount in 1996. He then joined Rosemount United Methodist Church/The Well.

He had many joys in life but none more than family. After retirement, Don reconnected with his Navy ‘buddies’ where he attended many reunions all across the East Coast. He also stayed busy volunteering at Rosemount Elementary, Volunteering at the Minneapolis VA Hospital, serving on the Everleigh Park Association Board, coffee mornings with his Rosemount guys, and being a full-time Papa. Don loved golf, participating in many tournaments over the years and belonging to the Rich Acres and Southern Hills Men’s Golf Clubs. Don was also a very giving person, contributing to many charities over the years and believed in giving back to others because he was so blessed. Being a lifelong avid sports lover, he was a great encouragement and fan to his daughter and granddaughters in all their sports endeavors. If you ever attended one of his granddaughter's events, you would know he was the proudest Papa in the stands. He loved keeping up with all the local teams both amateur and professional, and the only thing that would get between he and a Vikings game would be one of his granddaughters activities. But most of all, he loved to tell a good story or joke and he had an unlimited supply of both.

Donald was preceded in death by his parents, Ralph and Vera Smith; brothers Clifford Matthews and Dean Smith; son-in-law Douglas Wright. He is survived by his bride of 57 years, Karen Sue Smith, daughters Dawn Wright and Cynthia Smith, and granddaughters Delaney Wright, and Danielle Wright.

A Memorial Service will be held Saturday, September 10th at The Well/Rosemount United Methodist Church 14770 Canada Avenue West in Rosemount, MN. Services will start at 1 pm.

A Memorial Tree was planted for Donald
We are deeply sorry for your loss ~ the staff at Cremation Society Of Minnesota | St. Paul
Join in honoring their life - plant a memorial tree