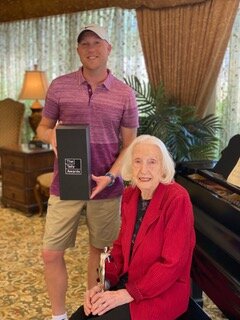 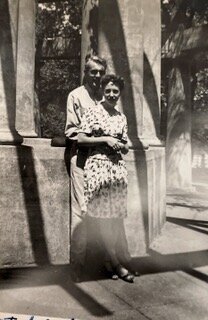 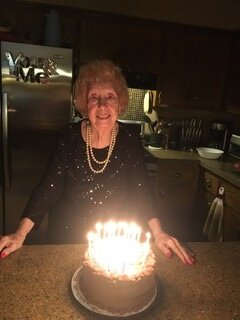 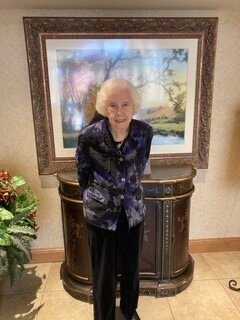 Audrey Mary Johnson was welcomed into the arms of Jesus on August 18th, just six weeks short of her 99th birthday, at Pearl Garden/Chandler Place in Minneapolis where she’s resided the past two years. Audrey was born on October 2, 1923 in Minneapolis to Albert and Mary Mross, the youngest of five children. She was happily married to Donald F Johnson, sweethearts since grade school, since November 4,1944 and until his death in 2008 - 64 incredible years together. During WWII, Don sent her daily love letters inside beautifully illustrated envelopes, and their story was captured by grandson Cory Laing, who received an award for his short film: https://youtu.be/WUNWHKGptcg

Besides Donald, she was preceded in death by her parents, siblings, and several nieces and nephews. Audrey is survived by her three daughters and their husbands, Cindy (Jeff) Laing, Sandy (Randy) Becker, and Linda (Gene) Muellner, ten grandchildren and 23 great-grandchildren, and three nephews and many great-nieces and great-nephews.

Audrey attended St. Anne’s Catholic School and graduated from North High School and Minneapolis Business College. Audrey and Don lived in Minneapolis, after a brief period in Kentucky during the war, and then Crystal as their family grew. She worked full-time until her children were born, with interesting positions at McGlynn’s Bakery and Warren Cadillac, and then was a full-time mom and homemaker.

When her youngest daughter entered school, Audrey rejoined the workforce part-time, most notably with Palm Beach Beauty Supplies, where she developed many lifelong friendships in the local beauty business. She then worked full-time at Northwestern Bell in their Yellow Pages division, where she received consistent recognition for outstanding results. Audrey’s sales skills were legendary.

Although Audrey enjoyed her career success, she was a devoted mom and excellent homemaker - a wonderful cook, a gifted gardener, a gracious hostess, and a creative seamstress.  She would sew matching outfits for all three of her daughters, and won accolades for their Easter parade costumes. She had a great sense of style, and was always well-dressed, including jewelry and accessories, and always called a very “classy lady.”

Both Audrey and Don retired in their early fifties, and had a wonderful life traveling, spending summers at their home on Briggs Lake and eventually winters in Panama City Beach, Florida. Audrey and Don had always been fantastic ballroom and swing dancers and in retirement, added square dancing to their repertoire.

Audrey made friends wherever she went, and that continued after Don’s death where she lived independently in an apartment at Copperfield Hill in Robbinsdale. She was an amazing line dancer as well, and at age 89, on a trip to China with her daughters and sons-in-law, she surprised and delighted them by joining a group of Chinese line dancers in a Beijing park. Back home, she joined a group of much younger (by about 50 years) women on a weekly basis to continue having fun doing this type of dancing - no partner required. She drove until she was 95 - a little fast most times - and generously gave rides to friends who no longer could drive.

Most of all though, Audrey enjoyed spending time with her family. She looked forward to her weekly Happy Hour event with her daughters and their husbands, and she enjoyed her colossal brownie sundae even more than her glass of wine. Hers was a life well-lived.

Audrey was well-loved by her family, as well as the many friends she met along her life’s journey. A Mass of Christian Burial will be held for the family at the Church Of the Sacred Heart in Robbinsdale, with private Internment at Fort Snelling National Cemetery, at a later date.

Share Your Memory of
Audrey
Upload Your Memory View All Memories
Be the first to upload a memory!
Share A Memory
Plant a Tree