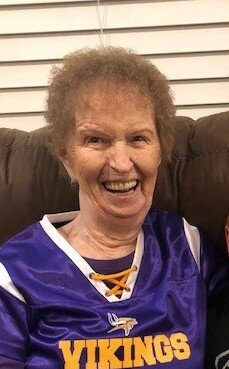 Edith (Edie) Linnea (Nordlund) Hutton O’Malley, age 90 of St Paul, Minnesota, passed away unexpectedly, but peacefully, in the early morning of August 15, 2022, at Regions Hospital after a twelve-day battle with head/brain trauma.

Edie was born in Rice Lake, Wisconsin, graduated from Luck, Wisc High School, and married Ray Hutton on June 6, 1951. They were married for 42 years and generally raised their children in Buffalo City, Wisc after stops in Atlanta, Minneapolis, Denver, and Winona, MN. After the kids were gone they moved to St Paul where Ray worked as a printer and Edie managed apartment buildings. Ray passed in 1993 and Edie continued to work managing apartment buildings until her retirement.

She was an avid Twins and Viking fan, a voracious reader, and loved playing cribbage. She loved egg rolls and Subway sandwiches. She was very active at her Presbyterian Homes Central Towers apartment building in St. Paul, playing weekly bingo and helping in the chapel. She made many, many friends during her 7 years living there.

The funeral will be held at the Cremation Society of Minnesota Edina Chapel, 7110 France Ave S. on September 9, 2022. A celebration of her life will be held at 11:00 am with visitation beginning one hour earlier at 10 am. A private burial service will be held for family members at Ft Snelling National Cemetery at a future date where she will be laid to rest with her loving husband, Ray, to be reunited after 29 years.

Share Your Memory of
Edith
Upload Your Memory View All Memories
Be the first to upload a memory!
Share A Memory
Plant a Tree