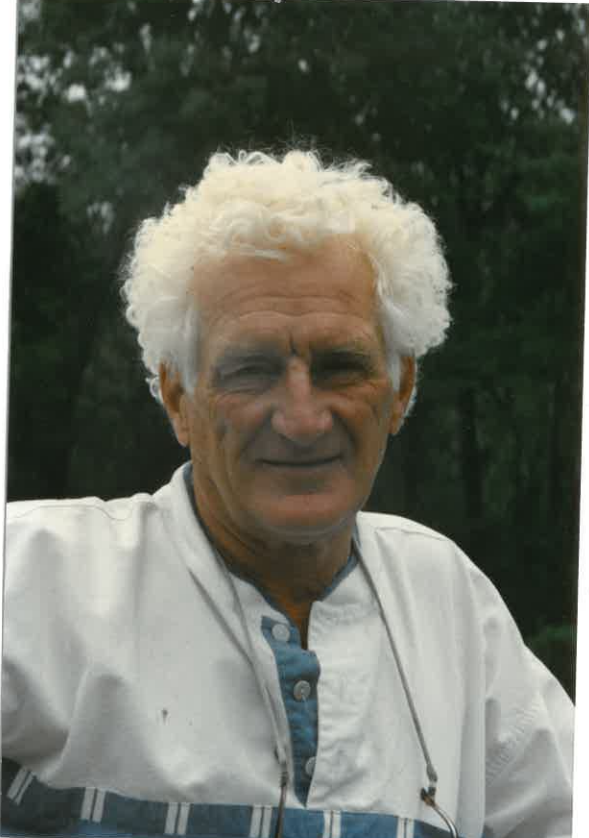 Newton’s law of inertia tells us that a body in motion stays in motion and Richard “Dick” Wakefield was a textbook example of that law. He lived an active life filled with athletics, activities, and learning. Known to all by his shock of white hair, Dick had a quick wit and was always cracking a joke or telling a story. He was a natural-born storyteller.

Born to Ralph and Margaret Wakefield (Bender), Dick was the first born of three children. Even as a child his activity level caused some parenting challenges. As described by his mother in his baby book, “April 23, 1929 – Dickie got caught in his sulkie. [type of stroller] Grandpa Wakefield had to saw him out with a hack saw.”

A WWII Naval veteran, Dick survived a training mission plane crash that left him with several injuries. After the war, he started a family with his first wife, Arline Wakefield (deceased). They had six children together: one passing as an infant shortly after birth, and two passing in adulthood. Dick often talked about those early years when his kids were little, telling of how at the age of 25, he had four children under the age of 5, while he worked two jobs and attended school at the University of Minnesota (U of M).

After graduating with a bachelor’s degree in teaching from the U of M, he began teaching for Roseville Area School District #623 in 1959. He would go on to become a middle school and high school assistant principal, and an elementary school principal during his long career there. In 1986, he retired from his position as Principal of Central Park Elementary School.

His commitment to K-12 education and youth literacy was evident in the leadership positions and honors he received. Dick was a 1972 appointee to the “Right to Read Advisory Council” by then Governor Wendell Anderson, a 1973 finalist for MN Teacher of the Year, President of the Minnesota Middle School Association in 1983, and an active member of the Partners of America education exchange program in the 1980’s traveling to Uruguay several times. He also chaired Junior Great Books for many years and volunteered at several elementary schools after his retirement.

Dick spent his entire adult life participating in athletics. He was ski-jumper, baseball and softball player, golfer, scuba-diver, hunter, and fisherman. A 2003 inductee into the St. Paul Ski Club’s Hall of Fame, he was honored for his skill as a competitive ski jumper, as well as his role as a coach, mentor, and judge. Those at the Club affectionately gave him the nickname of “Grey Eagle” because his bright white hair made him appear like an eagle soring through the air.

Dick recorded 10 holes-in-one during his lifetime, even gaining a few of those while legally blind from macular degeneration. He was a charter member of the Indian Hills Golf Club in Stillwater, MN. Dick and his second wife, Janet Watt, were also members of Seven Lakes Golf and Country Club in Palm Springs, CA where they spent their winters.

After retiring from his education career, Dick went back to school to study soil science and golf course management. He utilized that new knowledge at Indian Hills where he took on course maintenance projects, when he wasn’t busy playing golf. Whether he was winning tournaments, hitting holes-in-one, or patching up greens – Dick was at home on the golf course.

Dick was a longtime member of the Masons. He rose to the degree of Master Mason in 1970 and was later installed as the Worshipful Master of the North St. Paul Masonic Lodge 257. He truly lived their mission of service to others and to the community. His service and kindness were reflected in the many repair and maintenance jobs he did for friends, neighbors, and friends-of-friends; not asking for payment in return. He thoroughly enjoyed helping others.

His energy, zest, and love for life will be missed by all who knew him; especially his surviving wife, Janet Watt, his surviving children Catherine Marsh, Karen (Joel) Porter, and Douglas Wakefield. He is also survived by his stepdaughter Kimberly Nuckles, daughters-in-law Rose Wakefield and Jane Wakefield, in addition to many grandchildren, great grandchildren, nieces, nephews, and friends.

Dick is preceded in death by his parents Ralph and Margaret, his sister Marjory Christenson (Wakefield) and brother Wallace “Wally” Wakefield, and his adult children Richard C. Wakefield and Michael Wakefield, as well as infant daughter Kristin Wakefield.

In lieu of flowers, memorials to https://www.rosevilleareaschoolsfoundation.org

Special thanks to his hospice care team.

Celebration of life at a later date.