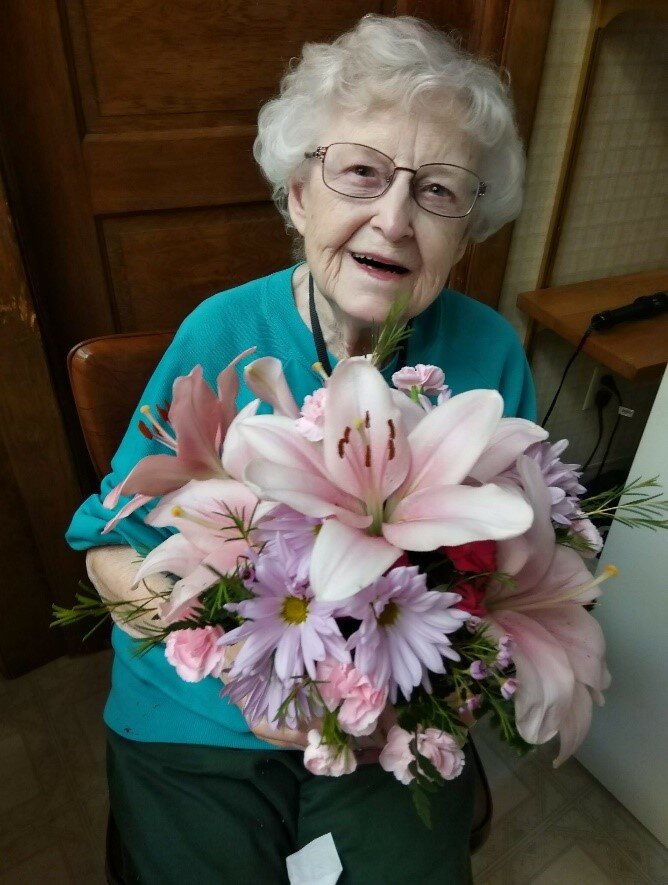 Edna Harrington passed peacefully into eternity on August 3, 2022 at the age of 93 after a short battle with pneumonia.

Edna Evangeline Erickson was born on April 22, 1929 at home in rural Beltrami County near Solway, Minnesota to Albert and Helen (Heminger) Erickson.  She attended Solway Public School through the 8th grade and graduated from Bemidji Public School in 1947.  She attended Bemidji State Teacher's College graduating in 1950.  Edna taught 5th-6th grades from 1950-1952 in Gonvick, Minnesota.

She met her husband through her friend Audrey Harrington who just happened to be Delbert's sister. On June 22, 1951, Edna and Delbert Harrington were married at the Solway Log Chapel.  In 1952, they moved to Sebeka, MN where Delbert taught Ag at school and Edna was busy with their growing family - Linda, Julie, James, Kelly and Stephen.

Edna and Delbert enjoyed gardening and canning or freezing their vegetables. She was a wonderful cook and baker. They also loved reading, filling their home with many books. She frequented the library and book mobile on a regular basis. Edna wrote down the names and authors of books she had read in part to not re-read a book.

Edna was very involved at the Sebeka Methodist Church teaching Sunday School and Bible School, serving in various offices in the UMW, Financial Secretary for the church, and attended Tuesday’s morning Bible Studies.

She was preceded in death by her parents, infant brother Stanley, brother Lester and his wife Myrtle Erickson, sister Jane Sexton and her husband Allan, son-in-law Michael Tuorila and her loving husband of 63 1/2 years, Delbert Harrington.

A celebration of life service for Edna will be on Saturday, August 13th at 11:00 with visitation one hour prior to the service.  There is also a visitation Friday, August 12 from 7-9 PM at the Sebeka Methodist Church, 100 Jefferson Avenue South, Sebeka, MN.  Inurnment will be at Green Hill Cemetery for a private burial.

Share Your Memory of
Edna
Upload Your Memory View All Memories
Be the first to upload a memory!
Share A Memory
Plant a Tree