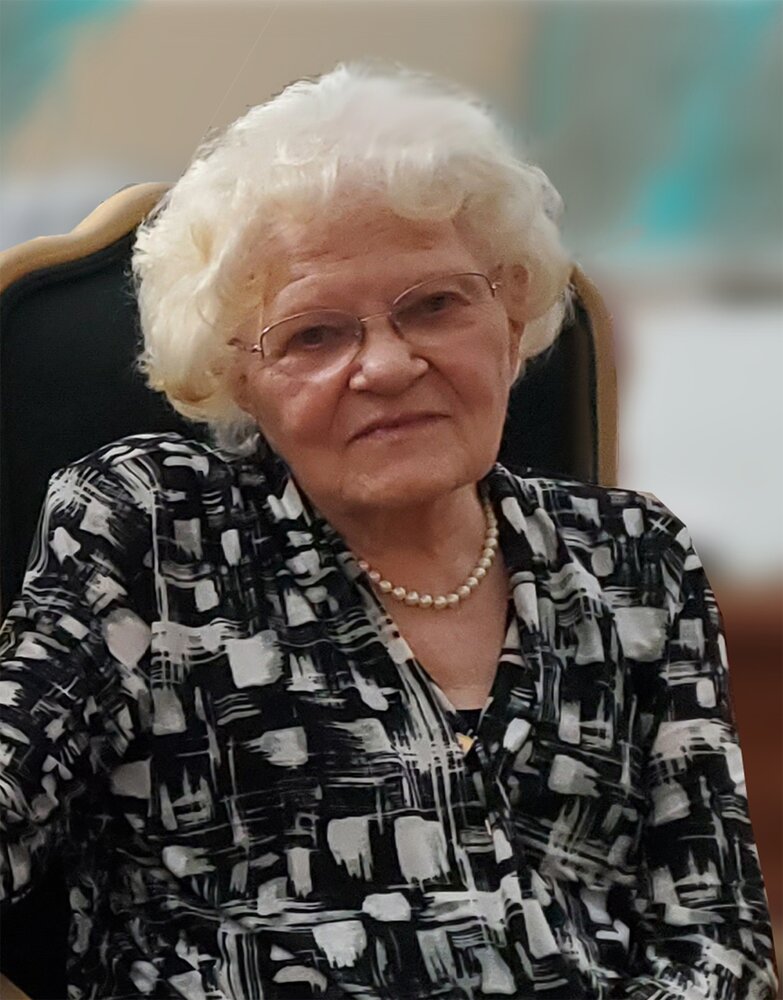 Shirley was born on November 15, 1928 to Allen and Emma Hemming. She had one older sister, Bette, with whom she was very close. Shirley joined her family in Heaven on August 2, 2022.

Shirley grew up in Saint Paul. She attended Douglas Elementary School, Roosevelt Junior High, and Harding High School. She enjoyed being able to go to school with her Aunt Margie throughout the years. In her free time she enjoyed dancing, going to the movies, and skating—both roller and ice.

During the Great Depression her father worked as a contractor rehabbing the homes where they lived, meaning she had roots in many neighborhoods across Saint Paul. She spent her later years reading up on the history of the city and sharing stories of her time growing up there.

She left school after 10th grade to work full-time. Her first job was at a Chinese restaurant in downtown Saint Paul before starting her career in book-binding at Brown and Bigelow. In those years, following the war, she met William Pettit whom she married in July of 1948.

The two made their first home in a small apartment on Maria. They felt like they moved into a castle! Soon after they bought their first home on Sims Ave. where they made many memories caring for Susan and Debra. Much to Susan’s dismay David joined the family in the spring of 1957. Shirley had the unique opportunity of having her husband call to let her know they were having a son! February 1, 1959, their little family moved into a brand-new home in Cottage Grove, Minnesota. Two weeks later Leanne arrived on the scene. Their family was now complete.

Shirley and Bill raised their children with love, patience, Christian values, and a strong work ethic. She was proud of her role as a homemaker: cooking meals, planting her garden, decorating her home and making crafts. She made blankets and embroidered towels for her family, she even won a ribbon at the Minnesota State Fair for one of her crocheted afghans.

She was preceded in death by her husband, William, and her son, David. Shirley and William were married for 72 years filling that time with dancing, traveling and socializing with friends. Shirley also cherished her relationship with David, the two spoke on the phone every morning. Shirley loved getting caught up on everything David and his family were up to.

She is survived by her daughter Leanne; daughter-in-law Nancy; and grandchildren, Joylyn, Benjamin, Allyson, Hunter and Carter.

Leanne looks back fondly on Shirley's ability to make their house a home. She was the foundation of their family. She dedicated her life to making sure Leanne and David were fed and clothed properly. She made the majority of Leanne–and her dolls'--clothes growing up, right down to the pearl buttons on her Barbie's wedding dress. Shirley loved hosting extended family for holidays. Her Duncan Phyfe table would fill the living room; bursting with family and food. Shirley was a wonderful, open-hearted person. When you became her friend, you became her family.

Joy, Ben and Ally cherished their time with Grandma whether it was spent cooking, baking, sharing stories or making each other laugh. In recent years the three kids would often go over to Grandma and Grandpa's house for dinner once a week and to help out around the house. They will always be thankful for this time with their grandparents and for the opportunities to hear their stories, perspectives and advice.

Shirley had a special relationship with each of her grandchildren. Carter and Hunter cherish the blessing of having Shirley accompany them on plenty of their travels throughout the years. In Hawaii, she made Christmas special by knitting them travel-size Christmas stockings (and filled them). In Cozumel, Shirley and Carter enjoyed a cool ice cream treat poolside every afternoon. She calmed Nancy’s fear of heights traveling on “the Road to the Sun” in Montana, and had countless picnics in the mountains, forest and rivers of the most scenic spots they could find. She was a loving grandmother and wrapped her grandchildren in quilts she crafted with care. She will always hold a special place in the hearts of many and will be missed sorely. We love you more!

Shirley enjoyed good health until the winter of 2022, living on her own through the Spring. She entered hospice care on July 3rd when daughter Leanne and niece Julia began caring for her full time. The three cherished their time together singing songs, watching Downton Abbey and listening to polka music. During that time we had many family dinners together where she would remark that her family’s laughter was music to her soul. Thankfully she was alert and communicative until the very end, with her last words, moments before she passed, being, “I love you more.”

A Memorial Tree was planted for Shirley
We are deeply sorry for your loss ~ the staff at Cremation Society Of Minnesota | St. Paul
Join in honoring their life - plant a memorial tree

Share Your Memory of
Shirley
Upload Your Memory View All Memories
Be the first to upload a memory!
Share A Memory
Plant a Tree