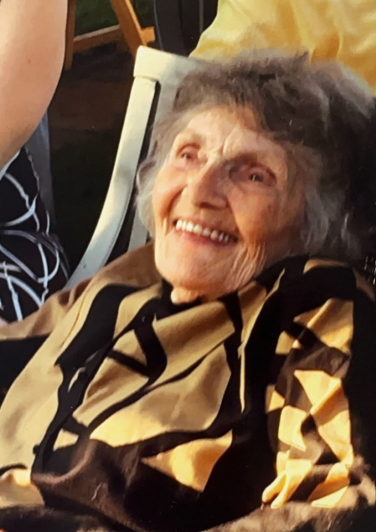 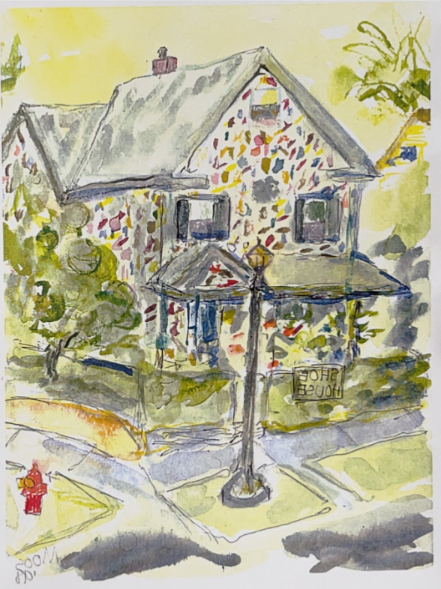 Margaret Tracy Gager Moos, best known as the “Shoe House Lady of St. Paul,” died June 17 at Episcopal Homes where she had lived for the past year. She was 98 – one day shy of her 99th birthday.

Tracy was born on June 18, 1923, to Leslie T. Gager, M.D., and Josephine Chapman in Baltimore, MD., and spent her childhood in several homes in Washington, D.C., including for a time on Embassy Row.

She recalled seeing Ambassador Henry Cabot Lodge Jr. walking to work every morning and was a classmate and friend of John Eisenhower long before his father, Dwight Eisenhower, became a general and U.S. president.

At the time, Washington, D.C., was a small town and Tracy would swim in the Lincoln Memorial Reflecting Pool and do her homework in the Library of Congress. Her uncle Henry Rigdon supplied fresh tomatoes to Congress and much of the mid-Atlantic region from his Maryland farm, which she often visited by horse and carriage.

The farm was just a few miles south of the Mason-Dixon line and one of the last stops on the Underground Railroad, complete with a hidden trap door in one of the outbuildings and a well for collecting water to complete the journey north.

Tracy graduated from Goucher College with a bachelor’s degree in economics with an emphasis in wildlife management – training she used to raise her five children who occasionally still quarrel over scraps of red meat.

Her interest in wildlife and the natural world was cultivated by her mother, who was an early advocate of free-range thinking. The family kept a pet crow, pigeon, and rabbit who roamed the house.

The Chapmans on her mother’s side have an interesting family tree. They are descendants of artist Thomas Cole, founder of the Hudson River School of painting. One of Cole’s works was in the Gager home next to the dart board. It’s now in a Yale University art gallery, holes and all.

Family lore also claims Johnny Chapman, better known as Johnny Appleseed, as a relative. One of Tracy’s granddaughters, a DNA analyst with the state of Wisconsin, is on the case to see if it’s true.

One of Tracy’s early jobs was as a switchboard operator at the Washington Post. Tracy told Katharine Graham – who later became publisher – she was older than she was in order to get the job. She held several other posts early in her life, including as a playground supervisor and a docent at the Baltimore Museum of Art.

That last job led to a lifelong interest in art and painting, including several decades she referred to as the “under the bed” era when she would hide her completed watercolors under her bed so no one could see them.

Gradually, under the tutelage of well-known University of Minnesota artist Malcolm Myers, Tracy’s collection of urban scenes from around St. Paul became sought after by collectors. Her notoriety was aided, in part, by a Detroit-based artist who used her St. Paul home in 1996 as a canvas for his “environmental art.”

Tyree Guyton urged neighbors and others to donate shoes so he could affix them to the outside of her home in Frogtown. Soon, the “Shoe House” became a tourist destination and a stop on school field trips, which sometimes included her grandchildren.

She was also very active in Republican politics in Maryland. Tracy was chair of the 7th Ward in Baltimore, a delegate to the Republican National Convention and in 1956 an elector for the state of Maryland – an honor typically given to recognize people who made a difference.

That political activism led to connections with U.S. presidents and friendships with their families and staffs that Tracy maintained throughout her life.

Tracy met her husband, Malcolm Moos — at the time a political science professor at Johns Hopkins University in Baltimore who later became president of the University of Minnesota — on a blind date. As the wife of the president during the late 1960s and early 1970s, Tracy’s keen intellect and ability to talk with everyone about anything was widely respected.

She was preceded in death by her husband, Malcolm; parents, Leslie and Josephine; brother, Jack; sister, Jane; and grandson, Daniel.

Services will be at 11 a.m. Tuesday, June 28, at St. Clement’s Episcopal Church in St. Paul and one hour prior to the service at the church. Memorials can be made to the Episcopal Homes Foundation, 490 East Lynnhurst Ave., St. Paul, MN, 55104.

The Episcopal Homes is where Tracy spent the last year of her remarkable life.

A Memorial Tree was planted for Margaret
We are deeply sorry for your loss ~ the staff at Cremation Society Of Minnesota | St. Paul
Join in honoring their life - plant a memorial tree

Share Your Memory of
Margaret
Upload Your Memory View All Memories
Be the first to upload a memory!
Share A Memory
Plant a Tree