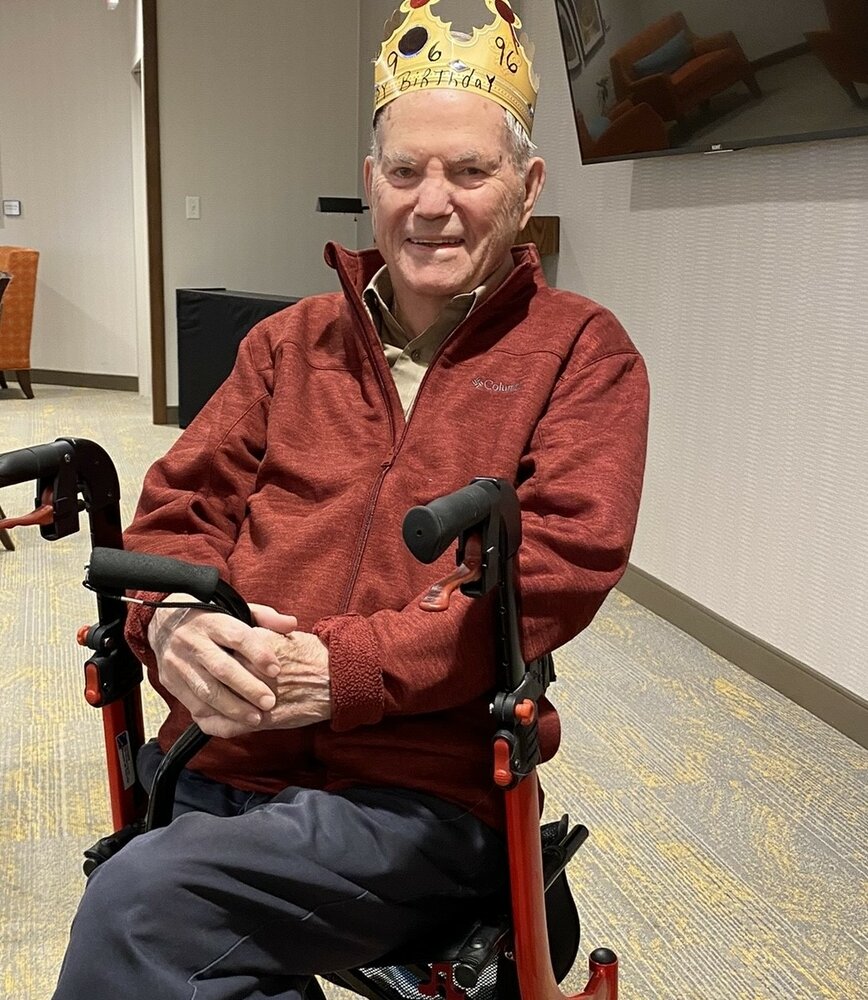 Born in Chicago on November 15, 1925, John was the oldest of four children born to Gustav and Florence (Goodletson) Hagman. He passed peacefully on April 15, 2022. A graduate of Foreman High School, Chicago IL, John enlisted in the US Marine Corp at age 17. He saw action in the South Pacific, including Mananas, Iwo Jima, and Okinawa, as part of the detachment on the USS Bunker Hill (1943-45). On May 11, 1945, he was on deck when the Bunker Hill was hit by a kamikaze and a torpedo from another plane and 346 men were killed. This shaped his life, and most likely formed his lifelong love of, and dedication to, country. John was sent to Officer’s Training School but did not complete training as the war ended. He ultimately earned a college degree at St. Olaf College (1949), in Northfield MN, and it was there that he met his wife of 73 years, Joan Andersen.

John and Joan had four children and 10 grandchildren who loved and respected him as a mentor and supporter. They seldom remember his raising his voice and could always recount the ways in which he helped them to grow. John enjoyed life, treasured moments with his wife, Joan, and could be counted on to share a glass of red wine or a dessert of ice cream and cake with Joan, friends, and family.

In retirement, he served as President of the Northern Dakota County (MN) Kiwanis, President of the Retired Educators Association of MN and as the first Minnesota State President of AARP. For 25 years, John also read books for the blind on Minnesota Public Radio. He was an avid reader throughout his life and will be remembered for sharing excerpts from his favorite authors with all who would listen. In addition, John was an adventuresome traveler, enthusiastic sports fan, active community member, and dear friend of many. In 1985, he received WCCO’s (radio) Good Neighbor Award.

A memorial service is planned for Sunday, June 12th, with visitation at 2:00 followed by the service and an ice cream social, at Central Lutheran Church in Minneapolis. Interment will occur later in the year, in the Moravian Cemetery in Ephraim WI, one of John’s favorite places and the family home on his mother’s side (Goodletson) since 1853.

John is preceded in death by his parents and two brothers. He is survived by his wife, Joan, his sons Karl (and wife, Bev of Johnstown CO), and David (and his wife, Sally of Grand Rapids MN), his daughters, Deborah Hagman-Shannon (and her husband, Daniel of Milwaukee WI), and Rebecca Hagman (Phoenix AZ), along with 10 grandchildren and 12 great-grandchildren. John, Joan and family also hosted and developed strong bonds with two exchange students, Eyassu Gayim from Ethiopia (and presently living in Sweden), and Lena Wallenbrand, also of Sweden.

Memorials may be made in John’s name to St. Olaf College, Northfield MN or Central Lutheran Church, Minneapolis MN. The family requests no flowers.