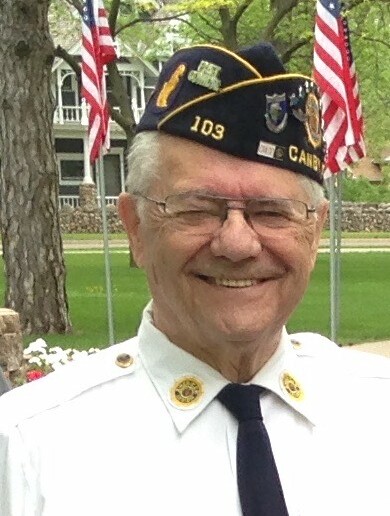 Paul Arthur Miller was born November 10, 1924 in Canby, MN to Art and Ida Miller. Following graduation from Canby High School in 1942, he enrolled in automotive coursework at Dunwoody Institute. Paul entered the Army in February 1943 and served in WWII in Germany and France. He was discharged in February 1946 and returned to Canby to work with his father in his implement business, as well as attending sales school at Vocational. He later purchased the business and continued to own/operate Miller Equipment until 2002.

Paul married Elaine Phelan July 5, 1947 at Incarnation Church in Minneapolis and celebrated their 70th anniversary in 2017. Elaine and Paul spent their entire married life in Canby, before moving to Buffalo in April 2017.

In 1946, the Canby VFW created the Last Man’s Company a social club that was started with 72 members of men that had served in wars protecting our country. Each year they gathered to honor their fallen comrades. In 2014, Paul was recognized as ‘the last man standing’ of the Canby Last Man’s Company.

Paul loved playing cards, golfing, dancing, being with his family and friends, and wintering in Texas.

Paul passed away peacefully on May 3rd at The Glenn Assisted Living in Buffalo, MN at the age of 97.

The family wishes to thank the AccentCare Hospice team, the staff at The Glenn Buffalo and the residents for the wonderful attention and care provided to Paul.

The family prefers memorials in Paul’s name be directed to Canby Blue & Gold Foundation, Canby Historic Lund-Hoel House, or charity of your choice.

A Mass will be held at St Francis Xavier Catholic Church in Buffalo, MN on May 17th at 11:00 am, with Military honors and internment at Fort Snelling on June 29th.

Share Your Memory of
Paul
Upload Your Memory View All Memories
Be the first to upload a memory!
Share A Memory
Plant a Tree