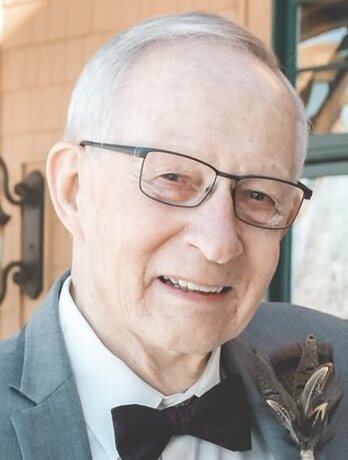 Age 83, of Bloomington Minnesota, passed away April 26, 2022 surrounded by his family following a six month battle with cancer. Born in Albany Minnesota, his formative years were lived in the Western town of Morris, Minnesota.

His parents Arthur and Rosemond welcomed him to the family on October 26, 1938. Dennis was the second of five sons. The Harren family attended Church at the Assumption of Mary, where Dennis attended school and served as an altar boy with brothers, Arthur, Paul, Thomas, and Kenneth.

During his high school years, Dennis was active in sports, including football, basketball, hockey and on track and field teams.

Upon earning his high school diploma, Dennis attended college at the University of North Dakota where he completed a degree in accounting. On September 18, 1965, he was united in marriage to Mary Ann Rusche and daughters Christine and Jennifer completed their family. An alleged tough guy, Dennis was a softie when it came to his daughters and granddaughters.

Dennis was an accomplished athlete, a sub-3-hour marathon runner, an avid cross-country skier, and bicycle rider. His drive to stay fit and to keep moving remained steady throughout his life.

As an executive at Sperry Univac, he survived numerous corporate changes and remained an employee of the company for over 30 years. He was competitive, set high standards, was reliable, consistent and was supportive of his coworkers.

Dennis was focused, hardworking, honest, and supported a wide variety of causes and nonprofit organizations. He had an aversion to receiving compliments, liked to keep a low profile, worked hard and he took great care of his family. Through his life, and despite his declining health, he remained positive and frequently reminded us all that “Life is Good”.

Share Your Memory of
Dennis
Upload Your Memory View All Memories
Be the first to upload a memory!
Share A Memory
Plant a Tree