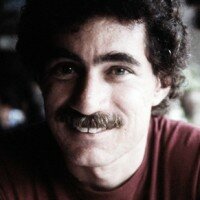 Kahn, Steve passed away on 4/23/22 at the age of 75, due to complications related to lung cancer. Steve was born in Brooklyn, New York. He grew up in West Miami and was an honor student at Coral Gables High School. He was a longtime musician who played the trumpet, baritone, french horn bugle and drums from the age of seven to the age of nineteen. He went to the University of Miami on a music scholarship and transferred to the University of Florida, where he graduated with a B.S. in Advertising. Steve worked as a copywriter at two radio stations, WUWU in Gainesville, FL, and WKKO in Cocoa Beach, FL, before moving to Los Angeles where he did advertising project work for Jack LaLanne Enterprises and wrote fifteen radio comedy shows for Mel Blanc Associates. He was a staff copywriter for The Broadway Department Stores, and he wrote and produced album promos for Warner/Reprise Records as well as Liberty/UA Records. He was an advertising writer at three L.A. ad agencies: Clinton E. Frank, N.W. Ayer/Jorgensen/MacDonald and Dailey & Assoc. Among his clients were Toyota, Yamaha and Santa Anita Racetrack. In 1974, he moved to Minneapolis where he was a writer/producer at BBDO Advertising and Martin/Williams Advertising, and a creative director at Miller Meester Advertising. His clients included 3M, Hormel, Honeywell, The Minnesota Twins, and The St. Louis Blues, and he worked with Ray Charles on an ad campaign for Scotch Recording Tape. He won more than 100 awards for his work, including a CLIO Award, and he was a CLIO finalist seventeen times. He was elected vice president of the Art Directors/Copywriters Club of Minnesota and was selected by AdWeek Magazine as one of the Top 100 Midwest Copywriters. In 1990, he started Steve Kahn Creative, a freelance creative service that operated for sixteen years. He also taught copywriting at the University of Minnesota where he was an adjunct instructor. He wrote more than 150 greeting cards for Recycled Paper Products. And during the 1990's, he played bass in two local blues bands, Code Blue and Blue Heat. In 1979, he met and later married the love of his life, Jill Spelios Kahn originally of Mendota Heights. They lived in Edina and were happily married for more than 38 years. They shared a love of travel, music, comedy, theater, movies, art and a night at home, playing Scrabble. Steve was preceded in death by his parents, Mel and Lillian Kahn and father-in-law, Gus Spelios. Steve is survived by his wife, Jill, and mother-in-law, Gloria Spelios; aunt Judy Kahn; sister Judy (Paul) Kulick; niece Kim Kulick and partner, James Reid; niece Kelly (Bobby) Harrington; sister Wendy (Steve) Murray; nephew Shawn (Shannon) Murray; niece Cydnee (Don) Cornwell; sister-in-law and and brother-in-law, Jody and Dr. Bernard Steele; nephew Dr. Wen (Betsy) Steele; nephew Dr. Ian (Christina) Steele; cousin Alan Roth; cousin Candy (Mel) Gulsvig; cousin David Chrysler and partner, Frank Cutugno; and beloved great-nieces/great-nephews, many dear relatives and friends. Special thank you for the exceptional care given by Dr. Joseph Leach and his team at MN Oncology, Heartland Home Hospice, and NC Little Hospice. Memorials in Steve's name may be directed to the Animal Humane Society MN, Second Harvest Heartland, or Little Hospice, Edina. Celebration of Life will be held at a future date. cremationsocietyofmn.com

Share Your Memory of
Stephen
Upload Your Memory View All Memories
Be the first to upload a memory!
Share A Memory
Plant a Tree