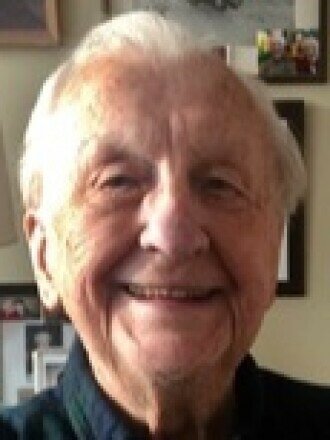 Donald Charles Myntti, 98, of Duluth, died on April 23, 2022, at the Marywood Residence (Benedictine Living Community) on the Campus of the College of St. Scholastica, surrounded by his loving family. He was born to Charles and Laura (Järvinen) Myntti in Chisholm, MN on August 11, 1923, and grew up in Ely.

Don’s life, until the end, was animated by his “legacy values”, those values he held most dear and wished to pass on to his children:

to work hard, do his best, and to earn the respect of all; to make his wife & children the center of his world; to nurture his life-long friendships; to follow his passion to see & know the world as a globe-trotter, and as a life-long learner; to choose optimism; to feed his unquenchable curiosity; to practice gratitude for having exceeded all expectations, and for his happy & healthy life; to celebrate his life-long attachment to the Iron Range & its people; and finally, to appreciate his Finnish roots and values.

Donald spoke Finnish exclusively at home until he began school at age seven. He described his boyhood in Ely, and his summers at Co-op Point on Eagles Nest Lake (spent among the Finnish families of co-operators & iron ore miners) as “perfect”. During his summers throughout his high school and college years, Don was happiest lost in the BWCA paddling with his best friend, Sig Olson, (Jr.). Immediately following graduation from Ely Memorial High School in 1941, Don & Sig set off for a memorable month in the Boundary Waters without packing much food, if any, fully confident that they could catch, hunt, and gather enough to keep themselves alive. They continued to paddle together as canoe guides every summer during college for Border Lakes Outfitters outside of Winton.

Don attended Ely Junior College for one year, receiving a Bachelor of Science degree in mechanical engineering from the University of Minnesota in 1945. He also graduated from the USNR Midshipman School at Cornell University, Ithaca, NY.

He married Rita J. Beron on November 26, 1947, at St. Rose Catholic Church in Proctor MN. Over their married life, Don and Rita had five children and moved 25 times, crisscrossing the United States following Don’s mining and naval careers. Don and Rita decided to return to their beloved Northwoods & Lake Superior, retiring to Duluth in 1991.

Don proudly served in the US Navy during World War II and the Korean War, retiring as a Lieutenant Commander – USNR. His passion for ships was legendary.

His memberships included the Kitchi Gammi Club (Duluth), Society of Mining Engineers (SME), Military Officers Association of America (MOAA), American Legion Post 342, Gitche Gumee Kiwanis Club, Propeller Club, and the Engineers Club of Northern Minnesota (ECNM). He was also a Life Member of the National Mining Hall of Fame, Leadville CO, and an active participant in the University for Seniors program at UMD.

Don and Rita travelled extensively throughout their lives within the United States and visited 65 countries. While in his 80s, he achieved his dream to visit Petra in Jordan and the Taj Mahal in India. Even at the end of his life, Don was ‘planning’ a final travel adventure to France and China, believing he had one last trip in him.

The Myntti Family would like to thank the loving staff at Marywood for providing Don with excellent & devoted care, while maintaining his dignity and autonomy. The family wishes to commend Mark Wiita from St Luke’s Community Care Team, and its Hospice Nurses, for the compassionate care they afforded Don at the end.

A family burial service will be held graveside at a later date. Arrangements were made by the Cremation Society of Minnesota.

In lieu of flowers, memorial gifts may be made to UMD University for Seniors, Development Office, 1049 University Drive, Duluth, MN 55812 to honor Don’s commitment to life-long learning, or to the Mayo Clinic, Department of Development, 200 First Street SW, Rochester, MN 55905 in gratitude for the excellent care Don received throughout his long life.

Please remember Don for a moment the next time you have the pleasure of taking a hot sauna followed by jumping into an invigorating northern Minnesota lake or when picnicking on the shore of Lake Superior!