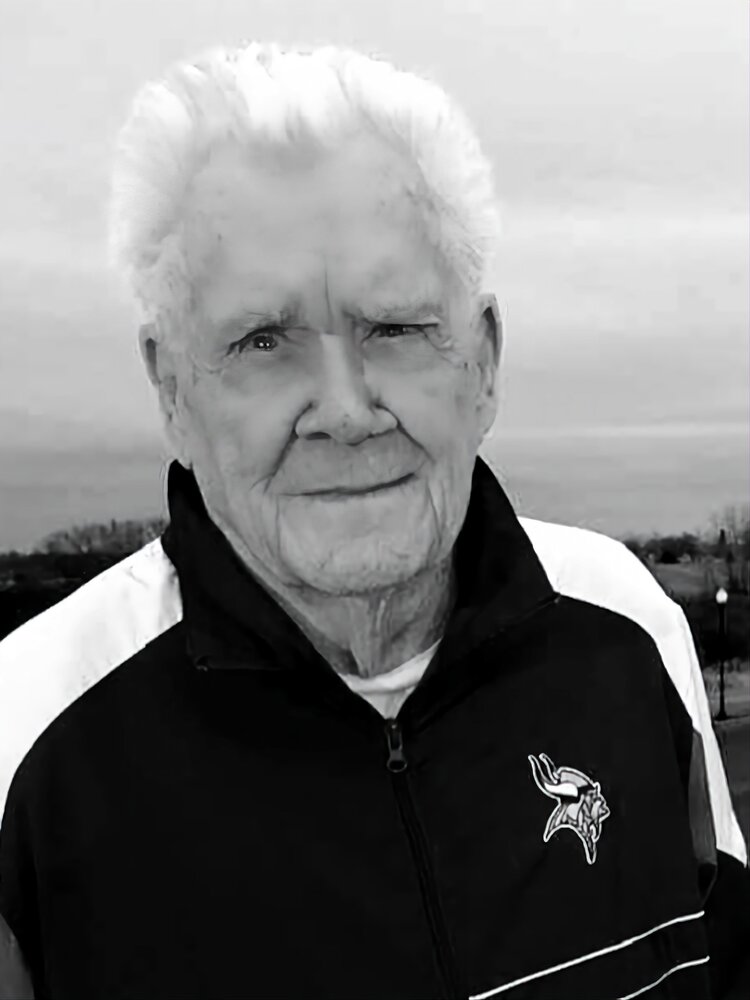 Smith, Denver Edward age 89, of Farmington, MN passed away surrounded by family on April 21, 2022. Denver was born to Joseph and Elizabeth (Pellete) Smith in El Centro, California and grew up in Van Nuys, CA at the McKinley Home for Boys during the Great Depression. Denver learned many life lessons at “the home,” and excelled on both his high school diving team, and as the quarterback for his varsity football team at Van Nuys High School. After graduation he went to work driving for Frito Lay Delivery. In 1952, at the age of 20, Denver entered the U.S. Army and served in combat, proudly and honorably, in the Korean War. Upon returning home he married Joyce Malone with whom he had four children: three boys, Denver Jr., John, Anthony (Tony), and a daughter Calinda. At that time, he started working for ITT General Controls in Burbank, CA, where he would eventually retire from management 35 years later. It was at ITT that Denver met the love of his life, Mary, and her two daughters, Kelly and Suzie. Denver and Mary began their life together in 1976, and while life was not always easy, the love, friendship, and laughter they shared was more than enough to sustain them through anything life brought their way. Denver and Mary raised the girls in Sunland-Tujunga, CA, and eventually moved to Glendale where they lived following Denver's retirement in 1991. It was during these years that he and Mary enjoyed spending time with the girls and their friends, whom they considered family, and earning him the nickname “Denver Dad”. They spent some of their early retirement years in Bullhead City, AZ, before moving to Minnesota in 1999 to be closer to their daughter and grandchildren. This is where Denver would spend the next 23 years, enjoying vacations with family “Up North”, in Wisconsin at the cabin, fishing trips to Canada with his son-in-law, and playing games and laughing around many bonfires with friends and family. Most of all he loved spending time with his grandkids in MN, and trips back to CA to see his kids, grandkids, and great-grandkids there. Denver was a humble and generous man with a huge heart and great sense of humor. He touched everyone he met with an unforgettable laugh and kindness. People gravitated towards him, strangers and friends alike, and he always made time to talk to everyone along the way. He was so loved, by so many, and our memories with him will be cherished forever. He will be missed dearly. Denver is survived by his best friend and wife of 45 years Mary Ann (Fabeck) Smith; Daughters Calinda (David) Fischenich, Kelly (Todd) Karlen, and Suzie (Dave) Rodoracio; Sons Denver (Adrienne) Smith, John (Mary) Smith, and Anthony Smith; Grandchildren Denver (Silvia) Smith, Sean (Kelly) Smith, Shantel (Eric) Williams, Johnny (Cassie) Smith, Jamie Vargas, Joshua Smith, Nichole (Shaun) Hocamp, David (Penny) Fischenich, Becky (Travis) Sabadin, Adam Karlen, Jeremy Karlen, Grace Rodoracio, and Ryan Rodoracio; many great-grandchildren; and his special nieces Julie, Geri, and Linda. He is preceded in death by his parents Joseph and Elizabeth Smith, brother Joe Smith, Aunt Marty Blythe, and daughter-in-law Lori Densing. Denver’s life will be celebrated with Military Honors at Fort Snelling National Cemetery in August. Notification will be sent to family and friends when dates are finalized. A video-stream will be available for those who are unable to attend in person.

Share Your Memory of
Denver
Upload Your Memory View All Memories
Be the first to upload a memory!
Share A Memory
Plant a Tree