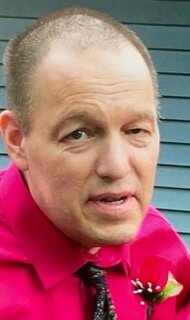 Brian David Prokosch (58), of Brooklyn Park died peacefully on September 7, 2021 surrounded by his family at his home after a long battle with cancer.

He is preceded in death by his parents Ruth Prokosch Gregorson and C. David Prokosch and grandson Ean Prokosch.

Born on August 4, 1963, Brian graduated from Humboldt High School in Saint Paul. Brian loved owning and operating a daycare center with his wife Wendy and especially, caring for the babies. He loved watching all Minnesota sports, especially the sports of his kids while they played or coached. He will be remembered for his love of family game night, his cleanliness, attention to detail and his sense of humor.

He will be greatly missed by his family. He made a mark on our hearts and life will never be the same without him.

A celebration of life will be held on Sunday September 12, 2021 at 12pm at the RiverWay Church Operations Center, 321 6th Ave SE in Osseo, MN.

Share Your Memory of
Brian
Upload Your Memory View All Memories
Be the first to upload a memory!
Share A Memory
Plant a Tree