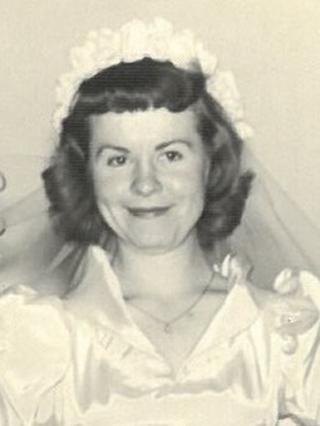 Jeannine Ivaloe Peterson, 91, of Morgan Park, passed away Thursday April 8, 2021 in her apartment in Elysian Senior Homes, Duluth, MN. She was born in Superior, WI on August 25, 1929, the daughter of Alfred and Ida Knight. Jeannine grew up in Morgan Park and graduated from Morgan Park High School.

Jeannine married John Vegar and together they owned and ran the Red Top Tavern in Oliver, Wisconsin, Jeannine later moved back to Morgan Park with her son Jahn. She worked for Minnesota Power and Light as a telephone operator for many years.

She enjoyed going to the family cabin on Oak Lake, by Duquette, MN. She read the newspaper cover to cover everyday. She liked doing crossword puzzles and reading.

After her marriage to Farrell D. Peterson, they would take annual trips to Las Vegas. Jeannine and Farrell purchased the family home in Morgan Park after the death of her mother. Jeannine survived cancer five times!

The family would like to express their sincere appreciation to the staff of Elysian Senior Homes and Kindred Hospice for their compassionate and loving care.

Graveside Service will be held at 1:00 pm on Thursday, April 15th at Oneota Cemetery.