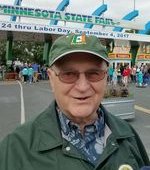 Formerly of St. Paul,  86 years, died on February 18, 2021 due to complications of dementia and diabetes.  A proud veteran, who will be buried at Fort Snelling Cemetery on Monday, April 26 at 2 pm.  Arrange to meet at Assembly Area #2 at 1:45 pm.  Limited to 50 mourners and must wear a mask. Tom is preceded in death by his parents, John J. and Madeline (Chiquet) O’Connell and his older brothers, John and Richard. He is survived by daughters, Pegeen O’Connell (Mike Sage) and Shannon Gallivan (Brent) and son, Dan; grandchildren, Sean Ruedy, Heather O’Connell (Thomas Cole), Colton O’Connell, Reena and Riley Gallivan; great -grandchildren, Maleah and Mekhi Cole and Delaney Ruedy, and many nieces and nephews. Tom is a graduate of Cretin High School Class of 1952 and of The College of St. Thomas, 1956.  Tom was a staff sergeant in the US Army, serving in Korea.  Upon returning home, he also was a US Army Reservist. He spent his entire working career as an accountant, working for a variety of businesses. Tom enjoyed walking, music and being with his family. The family would like to thank the many caregivers that helped Tom while he was affected by dementia.  Arrangements made by the Cremation Society of Minnesota.