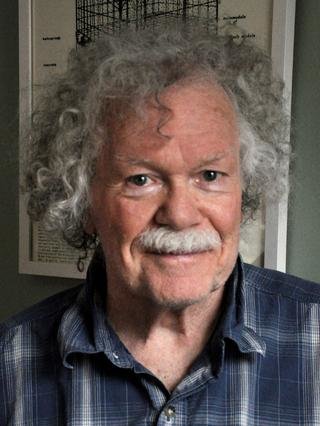 Leif, who so loved the ever-changing sounds of nature and weather, left us in the late evening on March 15, 2021.

He was born in Bridgeport, Illinois on March 28, 1932 and spent his childhood in the Illinois Soldiers’ and Sailors’ Children’s School in Normal, Illinois, after his mother Helen Susie Schnepper died when he was an infant and his father Simon Porter Brush could not care for him and his siblings due to war injuries. As he recalled, ISSCS provided excellent meals and many outdoor spots around the cottages to cultivate his love of plants and nature sounds. After learning about radio transmission during a short stint in the Army, he began a first career in radio broadcasting in various locations around the country as a reporter and hosted some classical music programs.

In the mid-1960s he began studying at the School of the Art Institute of Chicago and as a Graduate Teaching Assistant independently taught the School’s first sound course, Audible Constructs. He and his students created sound installations on the roof, and his own sound installations that he called Terrain Instruments were in his MFA Fellowship exhibition in the Art Institute in 1972. While at SAIC he entered a film competition run by fellow student Gloria DeFilipps, and they met again in the summer of 1968 at SAIC’s summer program at Oxbow School of Art in Saugatuck, Michigan. They were married in 1969 in the original Museum of Contemporary Art in Chicago in a wedding performance while the Museum was closed and the Franz Kline show was being de-installed. Gloria cherishes his unfailing support of all of her endeavors just as she assisted in many of his.

Leif went on to teach at the University of Iowa and their beloved daughter Sanna was born in Iowa City in 1975. The family then moved to Duluth, where Leif taught many students in Art Today, sculpture and 3D classes at the University of Minnesota Duluth from 1976 until his retirement as Professor in 2002. The location of their Duluth home with many trees and those he added over the years was perfect for his Terrain Instruments work.

Over the course of his artist life Leif received artist fellowships or grants from the National Endowment for the Arts in New Genres, the Minnesota State Arts Board, Jerome Foundation, and the Bush and McKnight Foundations. A permanent installation of his original 1975 soundwork was installed in 2013 at Klankenbos (Sound Forest) in Neerpelt, Belgium. He was a resident artist at the Yellow Springs Institute for Contemporary Studies and the Arts in Ohio and the Visual Studies Workshop in New York. His works have appeared in such venues as the INMM1 in Darmstadt, Germany; Minnesota Museum of Art Riverfront Gallery; GMEB Le Festival Synthese; SoundCulture at the San Francisco Art Commission Gallery; New Music America in Philadelphia; Walker Art Center Performance Series; Academy of Science Auditorium in Washington, D.C.; Hudson River Museum in New York; Wright State University in Ohio; the University of Maryland Baltimore County; University of Chicago Midway Studios; SUNY Alfred Gallery in New York; The Center for New Performing Arts in Iowa City, among many others.

A chapter about his work, “Windwitnessing: Sound Art and Nature Research by Leif Brush,” by Volker Dust, appears in Vernetzungen: New Music in the Tension Between Science and Technology, by Jörn P. Hiekel, and he is included in Stephen Wilson’s book Information Arts: a Survey of Artists and Researchers Working at the Intersection of Art, Science, and Technology, published by MIT Press. His article “Monitoring Nature’s Sounds with Terrain-Based Constructions,” co-authored with his wife Gloria DeFilipps Brush, appeared in Leonardo magazine. Pentiments 2017 is an album release of his recordings mixed and produced by Guido Gamboa and mastered by Giuseppe Ielasi.

Leif was preceded in death by his parents; his brothers William, Porter, Paul and Richard Brush; and sisters Helen Hughes and Aliene Helbling. He is survived by wife Gloria, daughter Sanna (Dexter) Ellingson and their children Anneka, twins Josie and Lily, and twins Graham and Reed. His grandchildren were a most important part of his life and they participated in his love of birds by sending pictures of those from their yard.

Arrangements are by the Cremation Society of Minnesota. A memorial of remembrance is planned for some future time with the immediate family.