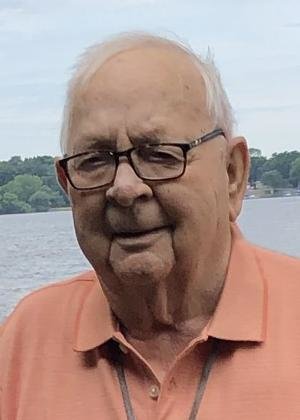 Clayton Leroy Shoutz, 89, of Litchfield, formerly of Cushing, passed away Jan. 16 at Bethany Assisted Living in Litchfield. A memorial service for immediate family members only will be held 11 a.m. Saturday, Jan. 23, at United Methodist Church in Litchfield, 1000 Sibley Ave. S., with the Rev. Bill Kerr will officiating. A private interment will take place at Ripley Cemetery in Litchfield. A live radio broadcast of the service will be transmitted on 104.5 FM in the United Methodist Church parking lot.

He was born Dec. 4, 1931, in Meeker County. He attended and graduated from Kimball High School in 1949 and started working for the Anderson Chemical Company. Clayton excelled in sports and was president of the FFA during his high school years. He was united in marriage to Joy Danielson June 12, 1954, at the First Lutheran Church in rural Cosmos. At the beginning of their marriage, they farmed near Star Lake. Clayton returned to work at Anderson Chemical Company when they moved to Litchfield in 1956 and then to a home on Lake Ripley in 1961. They lived there until 1968 when they moved to a hobby farm they bought just north of Litchfield in Forest City Township. In 1982 they moved to a home on Lake Washington when they owned and operated a laundromat in Hutchinson, for ten years called the 7 West Wash-n-Dry. He also worked for JD Enterprises during this time. They lived there until retirement in 1996 and then built a permanent home on Fish Trap Lake near Cushing. Clayton returned to Litchfield in 2015 and resided at Ecumen Gloria Dei and, most recently, Bethany Assisted Living. Some of his favorite activities at Ecumen were his afternoon coffee gathering with close friends, playing bingo, and participating in monthly birthday celebrations. He was also the past president of the Gloria Dei Resident Council.

Throughout his life, Clayton enjoyed sports, hunting and fishing, gardening, and the outdoors. He especially enjoyed lake life and had homes on Ripley, Washington, and Fish Trap. He was a particularly talented vegetable and flower gardener.

Clayton was preceded in death by his wife Joy; his parents Francis and Ora Shoutz; sisters-in-law, Lois and Bonnie Shoutz; and special friend Lois Nystrom.

A video recording of the service will be available online.

Share Your Memory of
Clayton
Upload Your Memory View All Memories
Be the first to upload a memory!
Share A Memory
Plant a Tree