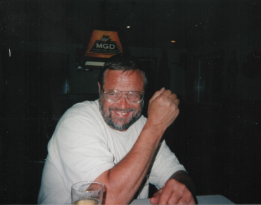 Ronald D. Kraml, 64 of Duluth passed away November 19th at home surrounded by his family. Born in Bloomington, Minnesota the youngest of seven children to Gladys and Richard Kraml. After graduating from Lincoln High School he enlisted in the Navy and served aboard the USS Talbot. After an honorable discharge he came to Duluth and worked at the Duluth Airbase. Upon closure of the Airbase he found employment at the College of St. Scholastica where he met his future wife Beth. They married in the spring of 1986. He enjoyed making memories with his friends and family camping, fishing, and tearing up the yard with his backhoe.

He is proceeded in death by his parents, brothers Donald, Thomas, Robert and sister Janet. He is survived by his wife Beth and children Jennifer (John Ellis)Kraml  and Brian (Jenifer) Kraml, brother Raymond sister in law Lucy Kraml (Minneapolis), brother in law Dan Soderlind, Mother in law Lillian Talarico and brothers in law Jay (Janet Rogers) Talarico, Alan (Teresa) Talarico and many Nephews, Nieces and Friends. Special thanks to Gina LaBelle for support and antics. Also, extending a thank you to the home care givers over the years and most recently Recovery Health Staff and Nurse Joanie L.

As per Ron's request there will be no service. A grave side service will be in the spring.