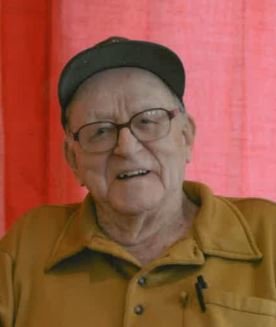 Age 96, of North Branch, MN, formerly of St. Paul, passed away peacefully on Sunday, Nov. 1 with daughter, Debbie at his side at Ecumen North Branch. He was born June 28, 1924 to Otto and Alvina (Baumann) Herzberg on the family farm in Eden Valley Township. He was the last surviving child of 15. He was baptized and confirmed at the Ebenezer Evangelical Church. He attended the Brown Country School. He joined the CCC at 17 and was sent to Akeley, MN and worked at the Badoura State Forest. He was in the Navy during WWII serving on the USS Boston in the Pacific Theatre. He also had 6 brothers serving in WWII, one was injured in the Battle of Tarawa, but all made it home safely. There was a total of 9 brothers who served their country. Art was always proud of that. Art moved to St. Paul after the war and met and married Angela Kerzich. They had 6 children and 57 years together. He worked many years for Admiral Merchants Trucking Co. He always liked to keep busy and had many part-time janitorial jobs after retiring, working for Visitation School, The Shalom Home, The City of New Brighton to name few. He also loved his yard and garden and would spend all day outside in the summer. He also canned a lot of his garden including Tomatoes and also many fruits and Vegetables. He was a Teamster Local 120, also a longtime member of the Paynesville American Legion Post 271. He is preceded in death by his wife, Angela (2008); daughter, Linda Ladoux (2015), Son-in-law, Dick Evans (2019); parents, Otto and Alvina Herzberg; brothers, Elmer, Reinholdt, Gordon, Harold, Oliver, Nobel, Erwin, Norman, Edwin, and Clifford; sisters, Mabel Grochow, Adeline Peters, Marcella Frank, and Evelyn Smith. He is survived by daughters, Deborah Evans of Stacy, MN, Pam of St. Paul; sons, Richard of Vadnais Heights, Jeffery of St. Anthony, and Thomas (Marilyn) of Germantown, WI; grandchildren, Geno and Chris Ladoux, Curtis, Carissa, Trevor, and Tyler Herzberg, and Anthony and Aaliyah Greer; Great Grandson, Cameron Ladoux; many Nieces and Nephews. He enjoyed many years of watching grandsons, Curtis and Anthony play football and Trevor and Tyler play Hockey. He will be laid to rest along with Angela at Ebenezer Cemetery at a later date. Many thanks to all the guys and gals at Ecumen North Branch St. Croix Bldg for their kind and compassionate care. Especially Alicia, Lanae, and Sarah.