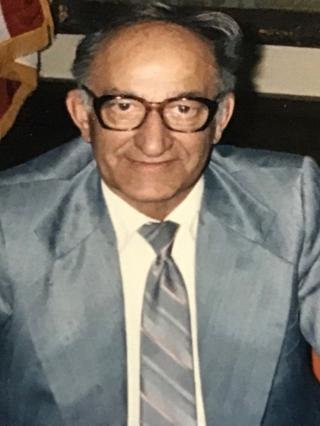 Steve Saban, lifelong resident of Hibbing, passed peacefully in the virtual presence of his immediate family at Essentia St. Mary’s Duluth on the evening of Wednesday, September 23rd.

Born March 22, 1925 to Milka Rudelic Saban and Mike Saban, he attended Hibbing schools completing his High School Equivalency Diploma while serving in the US Army as a member of the first wave of soldiers to touch land in WWII during Operation Overlord, Brakeman Railroad 033, Battle of Normandy. A man proud to serve his country, Steve was awarded the European African, Middle Eastern Service Ribbon, Good Conduct Medal 44, and received a US Army Honorable Discharge. He then graduated as a diesel mechanic from the Bailey Engineering School in St. Louis, MO.

He worked in the Scranton Mine near Hibbing, operated by the Pickands, Mather & Company and was an active union member in the 1950’s, elected as a union official traveling to Cleveland, Pittsburgh, and Washington D.C. for union negotiations and lobbying for the Mesabi Iron Range. In 1961 he joined the St. Louis County Highway Department where he was a member of the County Employee Union; he retired in 1987. Steve often said that he was “just trying to help another guy” through his union work. Being able to help others was what meant the most to Steve.

Steve was an appointed and elected public official from 1979 – 1995, serving on the Hibbing Planning Commission, Hibbing Joint Park &  Recreation Board, Board of the Hibbing Cooperative Credit Union, Hibbing City Council and Range Association of Municipalities and  Schools.

He married Frances Catherine Righino on February 16, 1952; together raising 3 daughters. In raising their daughters, Steve and wife Frances believed in the importance of education. At the dinner table, Steve would often tell his daughters they needed to complete college so they could get a good job to take care of themselves.

To his 7 nieces and 5 nephews he was known as Uncle Stevie. He filmed family holiday gatherings on his 1950’s Bell & Howell movie camera and had a penchant for taking photos with disposable cameras, always carrying one with him wherever he went. An avid collector of miniature liquor bottles, his basement at one time had over 600 miniatures for viewing. Steve had a dry wit and loved to talk to anyone and everyone about politics, sports, the weather and his life journeys.

Steve could be found with youngest daughter Lori standing along the top railing of the Hibbing Memorial Building supporting Bluejacket Hockey or driving Lori as a child in his black Ford panel truck to Bridgeman’s for ice cream while listening to Minnesota Twins games. He loved Banana Splits.

During his retirement years, Steve’s happiness came from road warrior trips in his minivan to visit daughter Sally in Palm Springs and daughter Cindy in Georgia where he would spend winter months. He had no cell phone or GPS, only a paper map and often his favorite grand dog Rubin by his side. He also enjoyed flying to fish in Canada and hunt in Colorado with friends, especially with friend Richard Spearman.

Memorials may be sent to:

Arrangements by the Cremation Society of Minnesota; private burial will be in the Hibbing cemetery.

The family wishes to thank everyone who was a part of Steve’s life and those who provided health care to Steve.