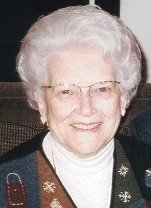 She was born on March 18, 1929, in Fairmount, North Dakota, to Scholastica and Peter Wawers. Eve graduated from Fairmount High School in 1947 where she was crowned Homecoming Queen and Miss Fairmount. Eve was active in a singing trio and the school choir, played clarinet in the band, and worked in the library as well as being an honor student.

Eve married the love of her life, Franklin (Jiggs) Miller on June 15, 1949, at St. Anthony’s Catholic Church. They celebrated 69 years of marriage.

While living in Fairmount, Eve and Jiggs owned Miller’s Cafe where they worked until moving to Duluth in 1952. Eve was a stay at home mom to their three daughters before she returned to work in 1970 at East High School and later at Lakeside School. She retired from the school system in 1986.

Eve and Jiggs traveled to Europe several times to visit their daughter, Cindy, who taught in The Netherlands and Germany. They also enjoyed spending their winters at Mustang Island, Texas, before she started on kidney dialysis in 2003. She graciously accepted the challenges of being on dialysis three times a week for 16 years.

Eve loved to entertain her family and friends and would often help others when they needed a helping hand. She loved gardening and was an active member of St. Michael’s Church for 60 years. She volunteered at Gabriel’s Book Store and the Used- a- Bit Shop. She was also a member of Lakeside AARP 2505.

The family would like to thank the caring staff of the Fresinius Dailysis Unit at Miller Dawn Hospital. They were a second family to Eve and she adored them all. Thanks also to the Essentia Nephrology Department, and the compassionate and helpful staff of the Solvay Hospice House.

A private family service and inturnment will be held at the Minnesota State Veterans Cemetery-Duluth on a later date this summer. Memorials preferred and will be directed to the Duluth Honor Guard.  In honor of Eve, please consider becoming an organ donor to help the many people in need, especially for kidneys.