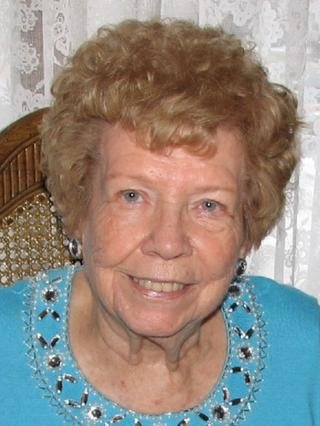 Rhoda M. Fagerstrom, 96, of Chisholm, MN (formerly of Duluth, MN) passed away peacefully into her Saviors arms on May 16, 2020 at Heritage Manor in Chisholm, MN.

She was born on November 28, 1923 to Gust and Hannah Johnson in Chisholm. After graduation from Chisholm High School in 1941 she moved to Duluth and completed studies at DBU. After several clerical jobs she married Rueben Fagerstrom in Chisholm on December 9, 1944. Their home was in Duluth. She remained a housewife except for a short time working at the Glass Block. Her favorite hobby was oil painting. She was a member of Bethany Community Church of Duluth. She lived a long life loving others because of her love of Jesus Christ.

She was preceded in death by her parents; husband, Rueben; brothers, Robert and Rodney.  She is survived by husband, Roy Fagerstrom who were married in 2009. Sons, Alan (Anita), Mark (Cindy), Craig (Gail); brother, Roger (Gloria), 7 grandchildren; and 9 great-grandchildren.  She will be greatly missed.

Share Your Memory of
Rhoda
Upload Your Memory View All Memories
Be the first to upload a memory!
Share A Memory
Plant a Tree