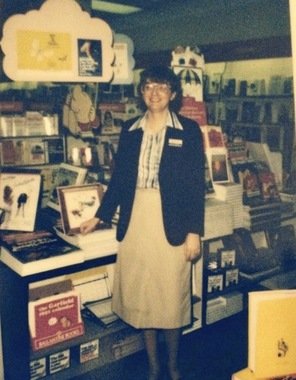 Donna Marie Steele, age 79, formerly of Mankato, died on Friday, May 8 at Edenbrook of Edina. Donna was born on January 25, 1941 to Matt and Benita Farmer (Deremer) in San Antonio, Texas during her father's basic training for WWII. She attended Loyola Catholic School in Mankato graduating in 1958. She was married to Gehrig Biehn on May 12, 1962 until his death in 1970. Their loving union led to the birth of three sons and one daughter. She later married Roger Steele in 1971 before divorcing in 1983. Donna was the manager of the two B. Dalton bookstore locations in Mankato for more than twenty years. Throughout her life, she had an enduring love of books, travel and family. She was known throughout the community as "The Book Lady", a title she took great pride in. She later worked in the layaway department of the local Walmart for almost a decade before retiring in 2004. She had a soul of a survivor having endured widowhood at a very young age, survived a traumatic brain injury, and weathered two battles with cancer. Donna is survived by her three sons and one daughter, Scott (Stephanie) Biehn of New Hope, Robert (Terri) Biehn of Bloomington, Shelley (Bruce) Biehn-Recker of Mankato, and Steve (Lisa) Biehn of Mankato; 11 grandchildren; 2 great-grandchildren; four brothers, Michael (Lynda) Farmer of Wichita, KS, Thomas (Karen) Reed of Forest Falls, CA, Bradley Reed of Mankato, Ron (Jocelyn) Reed of Everett, WA as well as numerous nieces and nephews. She is preceded in death by her husband Gehrig Biehn, mother Benita Reed-Korth, stepfather Harold Reed, and father Matt Farmer. A celebration of life will be held at a later date.