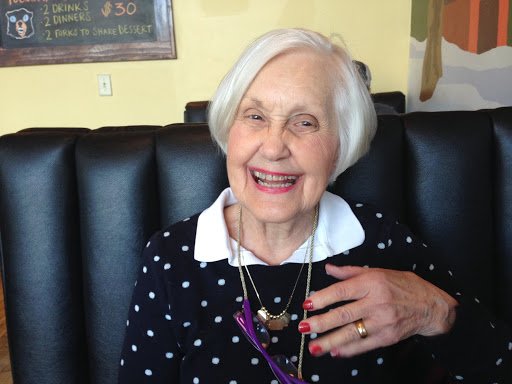 Passed away on May 6th, 2020. Pat, as she was known, was born on February 17th, 1932 in Minneapolis, the daughter of John and Hilma Lang. She was a member of St. Anne's Parish where she went to elementary school, followed by high school at St. Margaret's Academy. After graduating high school, she attended Nursing School at the University of Minnesota. She married her husband Jerry in 1956 and practiced nursing until she decided to devote all her time to her growing family.

Pat was an avid gardener (roses and african violets being a couple of her favorites) and active in democratic politics. She enjoyed local history and she and Jerry spent a lot of time in Clitherall, Mn., where Pat's Swedish grandparents had a farm. They also explored many other parts of the country and the world together.

Most of all, Pat's life centered around her family and helping everyone she could. There was no one she would turn away. She will be remembered for her unflagging support and sheer tenacity. If anyone could get it done, Pat could. She will be missed by all.

Predeceased by her parents;  brothers, Richard, Jack and Tom and sister, Mary.

Survived by her husband of 63 years, Jerry and their children Stephen, Margaret (Tom), Mary (John), Monica (Pat), Katie (Jim), Jerry jr (Carrie), Joanne (Tom) and her many grandchildren who she doted on: Erin, Lucy, Fred, Kathleen, Mary, Bill, Bernadette, Jerry, Margaret, Tommy and Bridget. She is also survived by her nieces, nephews, extended family and friends of many years.

Our family wishes to thank all of the amazing staff at Johanna Shores Senior Living for everything they did to care for our mom. We wish them continued health in this difficult time.

Memorial to be arranged at a later date.