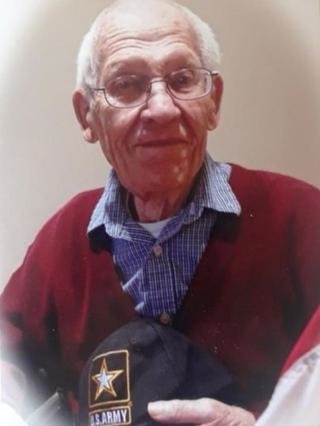 Eugene ‘Gene’ Clarence Polson, 92 of Duluth, passed away Thursday April 2nd at Marywood Care Facility. He was born on June 17th, 1927 in Duluth to Bernard and Jessie Polson and was a lifelong resident of Duluth. On September 18th, 1948 he was joined in marriage to Lorna Bujold in Duluth. They enjoyed 52 years of marriage. Gene was a lifelong member of Good Shepard Catholic Church and was an active volunteer. Gene served in the U.S. Army during WWII and was proud to have been a guard at the Nuremberg trials. Gene also retired after 32 years with U.S. Steel in Duluth. He is survived by 2 children, Sandy (Kevin) O’Brien of Hermantown, Mary (Al) Palusky of Duluth, grandchildren, Sara, Amy, Lorna, Jerry, Frank and Richard, 4 great-grandchildren, sisters Shirley (Michael) Martens, Carol Belland, and brothers Ron (Bev), and Jack (Carol). Gene was preceded in death by his wife Lorna, son Michael, sisters Virginia Baker, Joyce Drinkwine, and brothers Don, Tom and Bob. Gene was an avid sports fan, loved gardening, and enjoyed visits from loved ones. The family would like to thank the staff at Marywood for their outstanding care of Gene over the past year. No services will be held at this time. Burial will be at Oneota Cemetery.

Share Your Memory of
Eugene
Upload Your Memory View All Memories
Be the first to upload a memory!
Share A Memory
Plant a Tree