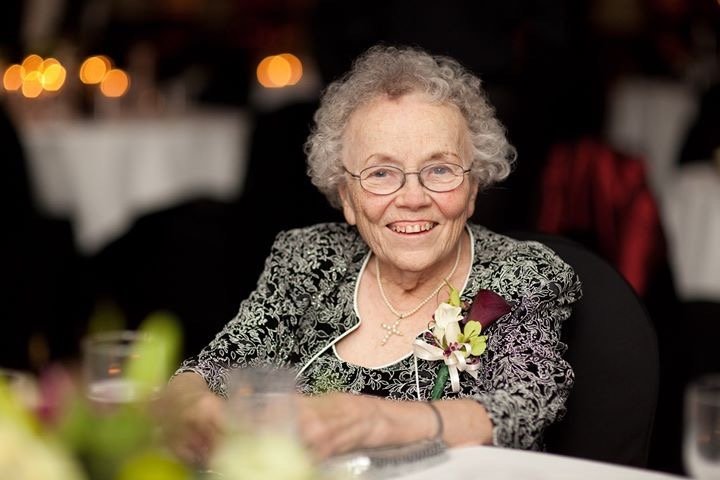 Her journey began on September 6, 1924 on the family farm near Lyons Nebraska.

Daughter to Allen and Esther Paulsen, sister to Arnold and Willis.

She had a collie (Rover) who let Elaine ride on his back and a bottle fed lamb she called Little Orphan Annie. She rode a horse (Snooks) and buggy to a two room country schoolhouse.

She met Warren, the love of her life, in New York City at Columbia University’s student union. They were married on September 16, 1950.

She balanced raising a family with working from home and writing Sunday school curriculum. She could type at the speed of lightening!

As a grieving widow, Elaine took her kids, their spouses, her grandkids, and her best friend to Japan, to see where Warren had died. She left his ashes there; he had said countless times: “If I die on a trip, I want to be planted on the spot!”

She began her career as a parochial school teacher in Clarkfield, Minnesota. She eventually specialized in teaching English as a Second Language in the St. Paul Public Schools’ Adult Basic Education program. Over her lifetime, she also became a licensed psychologist, a diaconal minister, and a hospital chaplain.

Elaine was a voracious reader and continued her educational studies throughout her life.

Elaine was a blessing to others. She was passionate for her work to serve, model social justice, provide education, and give spiritual counsel. She volunteered through the Lutheran church for numerous mission trips to Tanzania and a yearlong mission to India. She helped to establish counseling programs in both countries.

She was the first licensed psychologist to volunteer for the American Red Cross as a disaster relief counselor. She served across the country during many disasters including 9/11.

She traveled to all 50 states with her husband, Warren, and did extensive international travel. On trips to Scandinavia, she researched her family tree to enhance her biography of her Swedish grandmother, Pernilla.

Elaine spent her life burning the candle at both ends with an infectious smile on her face. Her compassion was inspiring. When asked what her secret to a long happy life was, she replied: “Enjoy the little stuff!”

Memorials preferred to the:

Memorial service will be announced in the future.