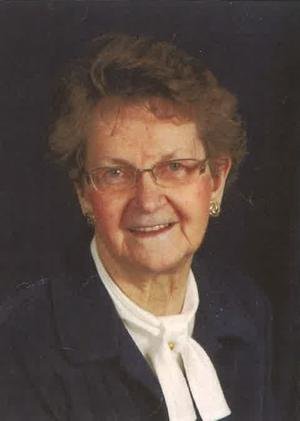 Betty Jean Jorgensen, 90, of Litchfield passed away peacefully Feb. 11, at Meeker Manor in Litchfield. Visitation will be from 5:30-7:30 p.m. Monday, Feb. 24, at First Lutheran Church, Litchfield. Interment will be at St. Paul’s South Walnut Lutheran Cemetery, Graettinger, Iowa, at a later date.

Betty was born Jan. 5, 1930, youngest child of Henry and Betty (Jensen) Duhn, in Emmetsburg, Iowa. She was baptized June 29, 1930 and confirmed May 21, 1944 at Bethany Lutheran Church, Emmetsburg. She attended rural school in Palo Alto County, graduating from Emmetsburg High School in 1948.

On Sept. 13, 1949, Betty was united in marriage to John Jorgensen at St. Paul’s Lutheran Church in Graettinger. They were blessed with four children, Gerald, Judyth, Gary and Linda. They farmed in the Graettinger area, then in 1951 moved to a farm near Emmetsburg, where they lived until 1960. They then moved to the Estherville area.

Betty was employed as a school cook in Gruver and Dolliver. She was an active member of Dolliver Lutheran and Palestine Lutheran churches. She also assisted her husband in the NK Seed store they operated in Estherville. In November 1977 they purchased a farm south of Litchfield, Minnesota, which they sold in 1986 and became residents of Litchfield. They were members of First Lutheran Church. Betty was employed at Holen’s Garden Center, working retail and wholesale. She continued wholesale selling, working for distributors in Minneapolis and Eagan. She was a traveling salesperson for twenty-eight years. She especially enjoyed spending time with her family, being a home-maker, baking, Thursday morning bible study, gardening and fishing. She battled Parkinson’s for many years.

She was preceded in death by her husband John; parents; infant sister; four brothers; sister; infant son; and infant granddaughter.

The family wishes to thank the staff at Meeker Manor for their gentle care of mom in her final years.

In lieu of flowers, memorials are preferred.

Interment will be at St. Paul's South Walnut Lutheran Cemetery, Graettinger, Iowa, at a later date.
Share A Memory
Plant a Tree