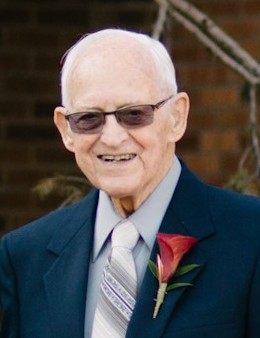 Richard C. Allers passed away on September 26, 2019 after a long and joyful life - he was 98 years old. In 1942 he joined the United States Coast Guard as a Radarman, Third Class during World War II. He sailed around the world on the USS General A.W. Greely - which would turn out to be just the beginning of his travels throughout his lifetime. While in the service he married the love of his life, Helen.

After the war Dick graduated from Dunwoody in Minneapolis as a designer draftsman. Dick and Helen moved to New Richmond, WI where they raised their family and Dick started the business A&P Heating. He is a former member of the New Richmond Kiwanis, the New Richmond Chamber of Commerce, and the New Richmond Masonic Lodge.

Dick had a witty sense of humor, a kind and gentle heart, and general curiosity and love for life. He spent his early 90s drafting and building replica model lighthouses and writing his life story.

Dick loved his family and he is deeply loved in return.

A gathering with friends and family will be from 1:00-2:30 pm on Saturday, October 12, 2019 at the St. Croix County Health and Rehab Center in New Richmond.

Memorials preferred to the family.