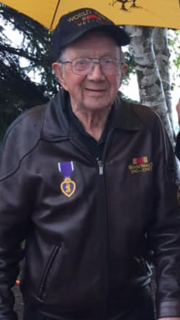 Dan served in the CCCs and joined the Army. He fought in World War II as a tank driver in the 776th Tank Destroyer Battalion, first in Africa and then in Italy where he was wounded in combat and awarded the Purple Heart. He then returned to Duluth and met the love of his life, Dorothy Nelson. They were married in 1945 and remained so until her passing, 63 years later. Dan spent his life working as a mechanic for Vern Johnson Oldsmobile, Conoco Refinery, Dave and Dan’s Auto Repair, Dan’s Skelly, and retired from the City of Duluth Parks and Recreation Department. Dan and Dorothy were foster parents for many, first in their home and then at Mt Carmel. Dan and Dorothy spent their retired years traveling in their motor home, participating in many flea markets and selling their homemade wares.

The service will be held on September 14 at Cremation Society of Minnesota at 4100 Grand Ave, Duluth, MN. Visitation begins at 2pm with a service following at 3pm. Interment will be at a later date.