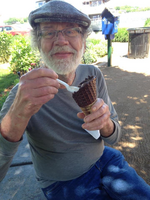 Richard Shide left this world on Nov. 19, 2021.  Born on June 6, 1951, he grew up in Larimore, N.D. with his siblings, Mark, Martha (Tim McGillivray) and Beth (Harley Cochran), as well as a host of close cousins, most notably his cohort cousin, John Hougen. His parents, Robert and Doris Hougen Shide, preceded him in death. Richard was an intelligent, progressive and kindhearted man; his influence on music and the state of the world was felt by all those close to him. Deeply thoughtful, he was ahead of his time in many ways. He became a programmer in the early days of computer software development, and was one of the first to work  in medical 3-D imaging technology.  His loss is also felt by his nephews and nieces; Craig (Jodi) Drengson, Jared (Laura) Drengson, Jill (Jon) Irgens, Aidan Cochran and Chloe (Evan) Bachman, with whom he had a close relationship. He was gentle, kind and generous to his nephews and nieces. Rick was an exceptional person. He often stood alone, or on the edge of convention. He did share the company of cats, rescuing and loving difficult  animals. He was generous with friends also, at one time working at a job he hated to help a friend get back on his feet after a business failure. Tall and slender, Rick’s presence was always felt in any company. A quiet person, he was deeply passionate about social injustice. At age 16, with his cousin John, he composed a letter to the editor regarding the efforts of Martin Luther King, outlining the difference between peaceful protests and rioting- a letter that shows great prescience  54 years later. Rick (Rickdog) lived in his own fashion and went his own direction; he will be missed. A gathering of family and friends to celebrate his life is planned in summer 2022.