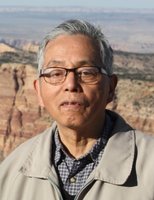 Zhongqiang was born on in Minhou, Fujian Province, China to Dequan Lin and Meiying Chen. As a child, he was talented in math, science and calligraphy. His intelligence and love for learning made him an outstanding engineer. He was a chief engineer overseeing over 200 employees in a large organization and was sent to Europe and US after China opened its door to the world in late 1980s. He was interviewed by the local news channel in Norway for his work during his many months of stay in Europe. The software program he wrote as an aide for himself was sought after by a number of colleagues even years after retirement. In addition to Zhongqiang’s professional career, his most successful career is in being a devoted father, husband, uncle and grandfather. His love for his family is characterized by his remarkable patience, kindness, understanding and a sense of humor. His culinary skills, carpentry work and tailoring skills are just some of the things his daughters adored him for, not to mention other hobbies like developing photo negatives, singing Peking Opera, playing bridge and Chinese chess.

It is his quiet strength of contentment that accompanied him through 13 long years of battle against the debilitating Parkinson’s disease. In his later stage of Parkinson’s disease, Zhongqiang accepted Jesus as his personal Lord and Savior. His pain and struggles are now forever gone as he is safely in the arms of Jesus in heaven.

Zhongqiang is survived by his brother Chaoqiang Lin; sister Xinqiang Lin; 2 daughters and their spouses Han Lange (Chris), Nan Schutz (Jim); and 4 grandchildren. He was preceded in death by his wife Weiqi He.