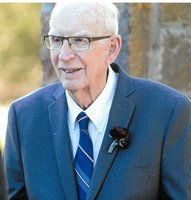 At 89, died on April 3, 2021. Survived by his wife of 58 years Ruth, children Craig (Jill), Kristi (John) Lewis, Brett (Jennifer); 6 grandchildren, Nicole (Ben), Hunter, Nils, Lottie, Nathan and Dane.  Survived by brothers Herbert and Glenn (Sandra).  Preceded in death by parents Elmer and Lottie Peterson; brothers Wilbur, Donald, David, Gustave, sister Sylvia.  He is survived by sisters-in-law and brothers-in-law, many nieces, nephews, cousins in the USA and Sweden.  He graduated from Woodstock Academy, Woodstock, Connecticut, in 1949, and the University of Connecticut in 1957.  He served in the USAF from 1950 to 1953.  Ted’s favorite part of his life was his family.  His biggest joy was watching his children and grandchildren play in games and concerts.  Ted traveled the world and in his free time he loved to golf and play cards with friends.  A memorial service will be held at a later date.  In lieu of flowers memorials are preferred to jdrf.org/minnesotadakotas/