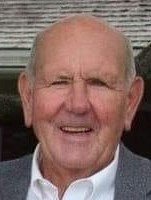 Jerry grew up in Red Wing, MN where he graduated from Red Wing High School in 1950. Following high school, He served in the Navy during the Korean War, stationed in the Philippines. In 1954 he married Gloria Betterly, his high-school sweetheart. They lived in Bloomington, MN where they raised their family. Gloria passed away in 1989. In 1999 he married Elaine Carson and their life together brought many travels and adventures. Jerry's favorite place was his home on Leech Lake where the family could gather and enjoy many good times together.