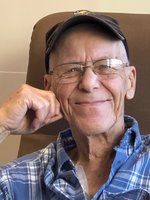 In 1958 Russ married Nancy F. Jensen at United Methodist Church in Albert Lea. They lived in Alden, then built a home and moved to Dawn Acres, Albert Lea in 1967.  They had three girls and divorced in 1983.

Russ held a variety of jobs throughout his life, starting as a soda jerk in Kansas City where he spent his earnings on the latest shoes. He ran an egg route in Alden, and worked at Miami Margarine in Albert Lea from 1966 to 1983. Russ and his brother Richard purchased a claim and mined for gold in Alaska from 1988 to 1993, an adventure of a lifetime and one of the highlights of his life. He loved the Alaska wilderness, the search for gold, and the time spent with his best friend and brother, Richard, and Rich’s wife Phyllis.

Russ was independent, empathetic, and intelligent. He loved to learn and was intrigued by the workings of nature and the universe. Time spent with family, friends, and a steaming hot cup of coffee were a priority for Russ. He cherished the simple joys in life like a sunny summer day with a gentle breeze.

A celebration of the life of Russell Sorensen will be held at a future date.  Details will be posted here when available.