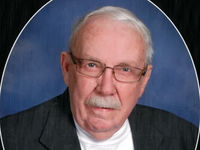 Joe was born on August 13, 1931 in Hastings to Joel and Mamie (Benson) Ofstie. He graduated from Wanamingo High School in 1949. He enlisted in the Army as a Morse Code operator. On May 11, 1957 he married Ruth Froyum.

Joe began his career as a carpenter working for Benny Nelson. He later worked as a construction superintendent for Gunnar Johnson Construction and then George W. Olson Construction. He was a lifetime member of Carpenters Local Union 87/322. Some of his most memorable construction jobs include the LaGrange Parking Ramp, First United Methodist Church addition, and Two Harbors Breakwater. He also worked on projects at Carlton College, St. Olaf College, and St. Catherine’s College. Joe referred to these jobs as his “college years”. He was proud to call Hay Creek his home and was a member of Immanuel Lutheran Church.

Joe was light on his feet and attended polka dances with Ruth at the Skyline Ballroom. They loved spending time at their cabin in Turtle Lake. Joe also enjoyed tinkering in his wood shop.

Joe was preceded in death by his wife, Ruth on December 25, 2011, an infant sister, Dana, and brother, Jon.

Funeral service will be at 11:00 a.m. on Saturday, February 15, 2020 at Immanuel Lutheran Church in rural Red Wing with Pastor Sorenson officiating. Visitation will be two hours prior to the service.

Memorials are preferred to Foundation for Fighting Blindness, Immanuel Lutheran Church, or the donor’s choice.

The family would like to thank the staffs of Deer Crest and Brighton Hospice for their loving care of Joe.